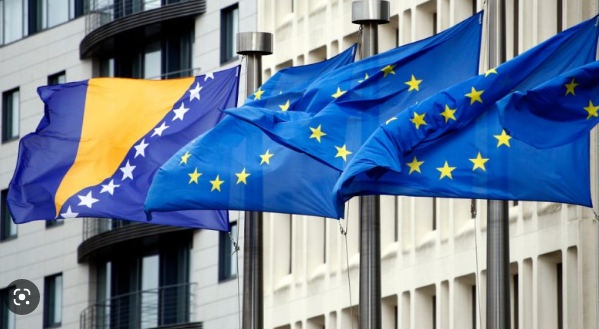 BRUSSELS: European Union leaders on Thursday granted Bosnia candidate status to join the union, putting the volatile Balkan nation at the start of a long road to membership.

Russia’s war on Ukraine has breathed fresh life into the EU’s willingness to consider letting in more of its eastern neighbours after years of stasis.

Bosnia now becomes the third country after conflict-ravaged Ukraine and Moldova to be granted candidate status in the past six months.

The EU is concerned that powers such as Russia or China might spread their influence into the Balkans if countries hopeful of joining the bloc are thwarted.

EU leaders gave their approval for Bosnia to become a membership candidate at a summit in Brussels.

European Council president Charles Michel called the step “a strong signal to the people, but also a clear expectation for the new authorities to deliver on reforms.”

“The future of the Western Balkans is in the EU,” he wrote on Twitter.

The move comes despite long-standing concerns over the political situation in Bosnia, a country of three million people burdened with ethnic divisions since its devastating war three decades ago.

It remains partitioned between a Serb entity and a Muslim-Croat federation connected by a weak central government.

It has a dysfunctional administrative system created by the 1995 Dayton Agreement that succeeded in ending the conflict in the 1990s but largely failed in providing a framework for the country’s political development.

The EU’s executive branch, the European Commission, has laid out 14 priorities for reform that it insists Bosnia must make good on before it can move on to the next stage of opening formal accession negotiations.

The Bosnian member of the country’s tripartite presidency, Denis Becirovic, said the decision was an “an opportunity we must not miss”.

“The authorities of Bosnia and Herzegovina must take advantage of this hand extended by Brussels to speed up the country’s march towards full EU membership,” he said.

The EU has complained that an internal stand-off caused by Bosnia’s Serb entity, the Republika Srpska, has led to “virtual paralysis” in the reform process in recent times.

There are also concerns over calls by Serb leaders for closer ties with Russia, and the entity’s nationalist president Milorad Dodik has vowed to stall the push towards the EU if it means more centralisation of power in Bosnia.

Dodik welcomed the EU’s decision while deriding the bloc for “wasting twenty years with empty stories”.”It is time for the EU and us in Bosnia and Herzegovina and the entities to finalise this process together and as partners,” he wrote in an internet post. Bosnia joins seven other nations with candidate status: Turkey, North Macedonia, Montenegro, Serbia, Albania, Moldova and Ukraine.

The process to join the European Union can take many years as candidates implement reforms that have to be rigorously evaluated by Brussels.It can also grind to a halt, which is the case with Turkey’s bid.

Bosnia’s candidacy was accepted as Kosovo on Thursday became the latest country to apply for membership in the bloc when it formally lodged an application to join.   Kosovo — which has fractious ties to Serbia — faces a particularly hard path on its quest to get in the EU.

Pristina declared independence in 2008, but Belgrade, along with its key allies Russia and China, still considers it a part of Serbia.

Five members of the EU — Greece, Spain, Romania, Slovakia and Cyprus — do not recognise Kosovo as an independent country.