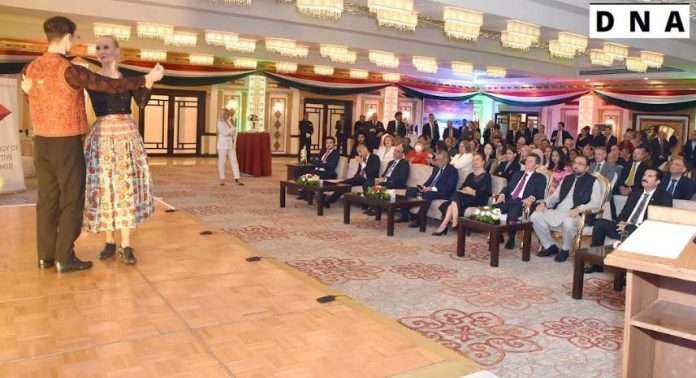 ISLAMABAD, OCT 23: Ambassador of Hungary Bela Fazekas has said on the 23 October 1956 a student protest in Budapest turned into a national uprising for freedom and democracy against communist dictatorship.

The Ambassador expressed these views while speaking on the occasion of National Day of Hungary. A large number of diplomats, government functionaries; members of the civil society members attended the event. Federal Minister/Chairman BOI Ch.

Salik Hussain was the chief guest. The real feast of the event was a cultural performance by the two young Hungarians artists whose dances left the audience spell-bound.

The ambassador further said Hungary and Pakistan established diplomatic relations only in 1965, but people-to-people relations between Hungary and this part of the subcontinent have started much earlier. Not everyone knows in this country that the oldest university of Pakistan, the University of Punjab was founded in 1882 by a Hungarian professor.

The cultural and intellectual life of the 19th and early 20th century Lahore would not have been so rich and vibrant without the small community of Hungarian artists, professors, orientalists who lived there.

Last year we finished the largest ever Hungarian cultural project in the capital of Punjab, the restoration of eleven paintings of the Sikh gallery painted by a Hungarian artist in the 19th century.

Ambassador Fazekas added, Hungary is not a big power. Neither politically, nor economically. But our globally renowned rich cultural heritage, the internationally recognized high quality of our higher education gives us a soft power status.

Each year more and more foreign students choose Hungary for their studies, including hundreds of Pakistanis. Currentlynearly 3% of all foreign students in Hungary are from Pakistan. And this percentage is going even higher next year as the Hungarian Government decided to double the number of State Funded scholarships for Pakistan from the current level of 200 to 400.

‘Equally important is our economic and commercial cooperation. The frequent mutual visits and meetings between our ministers, parliamentarians, high-ranking military officials provide a solid political basis for enhancement of our economic and trade relations.

In fact, our trade has doubled in the last two years. There are more and more Pakistani-Hungarian joint ventures in the field of water management, agriculture and food industry’.

He said, the flagship of the Hungarian companies present in Pakistan is the MOL, which is one of the largest foreign investors in the oil and gas industry and the second largest producer of oil in Pakistan.

I am very grateful to the MOL Pakistan company, to its management for their gracious sponsorship to the Embassy events including this reception today.

A real performance is worth a thousand words and that is why after the speeches he invited the guests to witness very exciting cultural journey with the help of two young Hungarian dancers.

Ch. Salik Hussain in his speech thanked the ambassador for inviting him and providing him with an opportunity of sharing his thoughts on the occasion. He said Pakistan values relations with Hungary adding these relations would continue to grow even in the coming days.=DNA