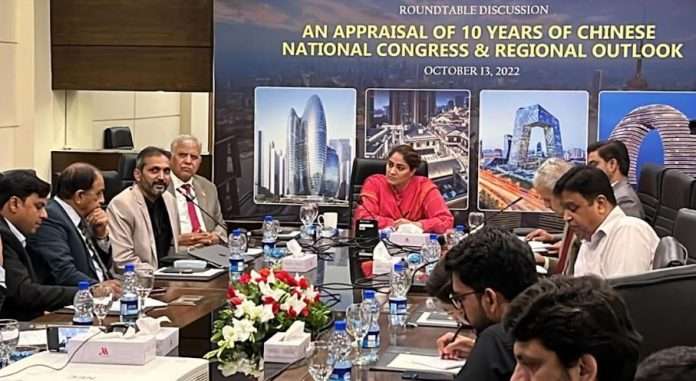 ISLAMABAD, OCT 14 /DNA/ – A roundtable discussion titled “An Appraisal of 10 years of Chinese National Congress and Regional Outlook” was organised under the banner of Islamabad Institute of Conflict Resolution (IICR), an Islamabad-based think tank.

While addressing the panel, Professor Zamir Ahmed Awan, Founding Chair GSRRA, Lecturer NUST, said “The future is China, China is the rising superpower, and the Communist Party of China (CPC) has played the main role in achieving such a feat. He further said that Chinese President Xi Jinping is a visionary leader with a global perspective. The policies implemented under his leadership in China are being followed by multiple countries across the world.

He asserted that the US openly considers the emerging power China as a threat and is exercising a policy to contain China, counter China, and engage China at strategic diplomatic, and economic levels. China has the capacity to reshape the global order, as its leadership has emerged as the strongest in the world. China has successfully curbed the menace of corruption which led to the eradication of poverty.

In his virtual presentation over Zoom link, Dr George H Cooke, Diplomatic Historian, Sri-Lanka, said that the most precious aspect of Chinese economic and social development in the last 40 years of reform and opening up has been the ability of the country to grasp the logic of history and adapt to the tendency of the times. He underscored that the Chinese leadership has sought to strategize foreign policy efficiency by basing it on domestic demand and policy.

Mr Shakeel Ahmad, Political Economist, in his talk on the occasion said that the most important contribution of CPC is the production of visionary people who possess leadership characteristics of wisdom, competence, and selflessness. He further highlighted how the Chinese Leadership could foresee things beyond the wall, possess the competence to draft and frame policies, and steered the state out of poverty. He underlined that selflessness, and high moral and ethical values of the leadership helped China to emerge as a rising power.

Mr Carlos Martinez, Independent Researcher & Co-editor of Friends of Socialist China, UK, with the 20th CPC National Congress being held in three days, it is an opportune moment to take a look at china’s system of people’s democracy, a subject that is often misunderstood and misrepresented. Particularly in the western world in the context of a new cold war where China is constantly demonized and labelled as being undemocratic.

He went on to say that, the western world has positioned itself as the sole arbiter of democracy. However, the big priorities for the Chinese Government are tackling poverty, building common prosperity, ensuring that everybody has a home, has access to healthcare, has access to education, clean water, and modern energy, ensuring people are protected from the pandemic, dealing with pollution, developing renewable energy, cracking down on corruption, and generally improving people’s quality of life, this is people’s democracy.

Dr Tahir MumtazAwan, Head of China Study Centre, COMSATS University, in his address said, The 20th CPC National Congress has been termed as ‘Xi Jin ping’s Coronation’. Hopefully, CPC and Xi Jinping will emerge even more resilient post the 20th CPC Congress, which paves the way to China’s rise as a global power. China is working further to become not only more powerful but aiming for regional prosperity and common growth, he added.

He stressed that China has a policy of non-interference and not suppressing other nations. China was the first country to receive and send diplomatic delegations to and from Afghanistan post US withdrawal in 2021.

In the concluding remarks Ms Sabah Aslam stressed that Pakistan dearly needs a strong and selfless leadership like that of China. We need to learn lessons from the Chinese to help develop our country Pakistan. We need to evaluate the Chinese growth and strength and allow the national government to consolidate and strengthen so as to be impactful and strong enough to implement the policies for the betterment of the nation.

The conference came to end with a question and answer session followed by Hi-Tea.