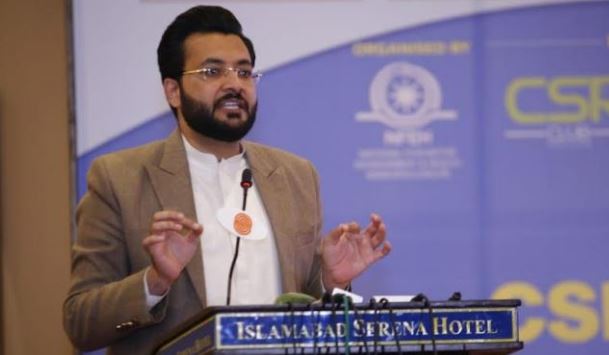 ISLAMABAD: /DNA/ – Pakistan Tehreek-e-Insaf (PTI) Central Secretary Information Farrukh Habib said that the imported government has shaken the very foundation of the country by creating political and economic instability in the country.He said that Pakistan was standing at the crossroads because more than half cabinet of the imported government was guilty and was facing serious cases.

Farrukh Habib stated that the conspiracy was hatched at a time when Pakistan was emerging as a major player at the global stage due to Imran Khan’s tireless efforts and visionary leadership and there was economic and political stability in the country.However, he lamented that the corrupt ruling junta took no time to ruin the economy, making people’s lives miserable. Lashing out at the Maryam Aurangzeb for criticizing Imran Khan, Farrukh Habib reminded her that it was her leader who was absconder not Imran Khan.

He said that PTI Chairman held record breaking public gatherings across the country after being removed from power through the US-backed conspiracy and he did not flee the country like Nawaz Sharif did.PTI Secretary Information went on to say that Nawaz Sharif staged a health drama to flee the country and started attacks state institutions from London.Farrukh Habib said that the whole family of Sharifs was fugitives and they were wanted to the courts in various cases of corruption.He said that Imran Khan lived in the hearts of the people and every conscious soul supported the ideology of PTI that was the reason the imported government was reluctant to go for a snap polls.Farrukh Habib revealed that the incumbent government broke all records of inflation as prices of daily-used items skyrocketed due to which they don’t do the courage to face the public.He stated that IMF also pressurized Imran Khan to put a burden on the masses but he flatly refuted and announced relief for the people instead.However, contrary to that, Farrukh Habib said that the imported government kneeled down before the IMF by accepting all its undue demands to burden the people and ruin the economy but even that they could not convince the world lending body.He feared that their economic terrorism has posed a threat to Pakistan’s national security.Farrukh announced that the people were all-set to liberate the country of this band of corrupts and they would once again exhibit their allegiance and confidence on Imran Khan by participating in sizable number in anti-inflation power show on Sunday.