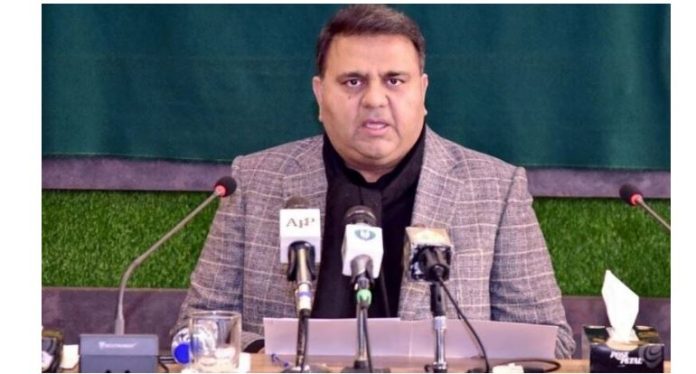 ISLAMABAD: /DNA/ – Pakistan Tehreek-e-Insaf (PTI) Central Senior Vice President Fawad Chaudhry lashed out at the imported government for treading on the path of fascist Narendra Modi government by issuing non-bailable arrest warrants for several PTI leadership in sheer violation of the apex court verdict.Addressing a press conference here on Friday, Fawad said that in the PTI’s political committee meeting, Chairman PTI Imran Khan and the entire leadership expressed grave concern over the Anti-Terrorism Court’s (ATC) issuance of non-bailable arrest warrants for 17 PTI.He said that the ATC issued non-bailable arrest warrants for PTI leadership including former federal ministers Hammad Azhar, Shafqat Mahmood, Yasmin Rashid and others for allegedly damaging state property during the party’s May 25 Islamabad long march.Fawad stated that the filing of cases against PTI leadership was sheer violation of the Supreme Court’s decision, as no such case can be filed against peaceful protestors by the ATC.He noted that no political party in Pakistan ever a registered blasphemy cases against its opponents but the imported government crossed all limits, as they raided the houses of the people by violating the sanctity of four walls, which was unprecedented.He made it clear that people of the country was looking towards the apex court, as when the report would be submitted in this regard. Fawad Chaudhry revealed that a sessions court judge dared to take action against Rana Sanaullah Interior Minister; however, the Lahore High Court suspended him forthwith.He went on to say that the police subjected the PTI workers of worst torture and teargas shelling, which reminded them the fascist Narendra Modi who was registering false and fabricated cases against political opponents in Indian Illegally Occupied Jammu and Kashmir (IIOJK) to silence the dissenting voices in the occupied valley.In Pakistan, he said that Sharif family was treading on the same path because both the Modi and the fascist government had same thinking.Reacting to Maryam Safdar’s outbursts against retired army officers, Fawad Chaudhry said that Maryam ridiculed the sacrifices of the military officers, which was reprehensible and condemnable. He asked Maryam to be careful while speaking about the heros of the country.Fawad Chaudhry said that the imported government compounded the miseries of the people manifolds through storm of inflation and unscheduled and prolonged load shedding amid the scorching heat.Fawad said that the imported government completely destroyed the Pakistan’s foreign policy, as the rulers visited Saudi Arabia, UAE and Turkey for seeking financial support; however they faced humiliation and returned empty handed from there.PTI government established relations on the basis of equality that was the reason we initiated process to ink deal with the Russia to procure cheap fuel from Russia. However, he said that conspiracy was hatched and PTI government was ousted when everything was moving in right direction. Fawad said that the Sharifs and Zardaris did not purpose independent foreign policies because they stashed their money abroad due to which the West treated them like their personal servants. Talking about the budget, Fawad Chaudhry said that the budget would be further exacerbate the miseries of inflation-ridden masses, as the imported government was lying more taxes. Fawad said that the imported government paralyzed the country in 60 days completely and brought the economic wheal to a halt.