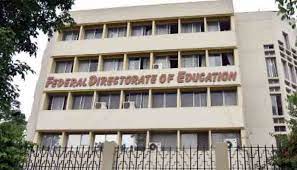 ISLAMABAD,:Federal Directorate of Education (FDE) had taken numerous steps while many were in pipeline to increase the number of schools/colleges in Islamabad Capital Territory keeping in view the major increase in population of federal capital.

According to the official sources, the construction of 07 institutions is near completion and these institutions will become functional w.e.f August 2022 for new academic session and it will accommodate approximately 7480 students.

However, 519 rooms are to be constructed in existing institutions in next 2 years under the project titled “Provision of Basic Educational facilities in Educational institutions of ICT under FDE which will accommodate approximately 20760 students, the sources told APP.

Similarly, reconstruction/upgradation of IMSG (I-V) Tumair & Dhoke Suleman (FA) Islamabad will have the capacity of 960 students.

It is worth to mention here that Federal Directorate of Education has 424 educational institutions from Prep to Degree Level. Approximately, 225,115 students are presently studying in these schools/colleges.