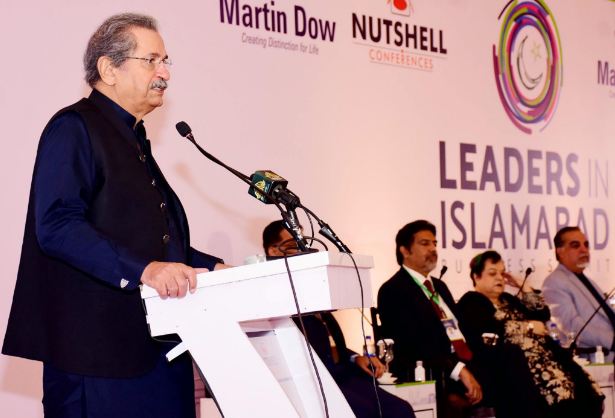 ISLAMABAD, SEP 22 (DNA) – Federal Minister for Education and Professional Training, Shafqat Mehmood on Wednesday said that the widely debated unified curriculum launched by the present government will be the first-ever curriculum to studied by the elite as well as public schools.

Speaking at a two-day summit held here in a local hotel entitled “Leaders in Islamabad”, he said “Our effort to implement a unified curriculum in the country is going to be studied by both private and public schools which has never been happened in the history”.

The minister said that the present government headed by the Prime Minister Imran Khan was taking concrete steps to channelize the potential of youth in right direction. “Creating opportunities for young people would be a challenge as they are the asset of the country”, he said.

He quoted an example of Japan who wanted to hire services of young people from Pakistan and has contacted us in this regard.

Quoting a poetic verse, “Zara Num Ho Tu Yeh Matti Bari Zarkhez Hey Saaqi”, the minister said that “we are working diligently to move ahead this country which is the prime motive and aspiration of the Prime Minister”.

He said our country was facing enormous challenges and emphasized that “we have to build an inclusive and educated Pakistan which meant that it belongs to everybody as its stakeholder and everyone should have the realization that this is his Pakistan”. He expressed his displeasure over low literacy rate i e. around 67% in Pakistan after passing of 70 years of its life.

Shafqat Mehmood said that our country is mainly comprised of a population belonging to different values, aspirations and culture. “Our education system has actually divided Pakistan on the one hand, Madarasas were producing an entirely different generation, while on the other hand the public and private schools were also adopting different curriculum standards”.

The minister urged upon the need to follow democratic norms so that the people can realize that their aspirations and demands were accepted truly in this democratic country”. The minister said that our country has been facing challenges on economic fronts too. “Economic progress is a key to development and progress and prerequisite to moving forward as a successful nation” adding “If economy grows, the country will move forward and employment opportunities will automatically be created”, he said. = DNA