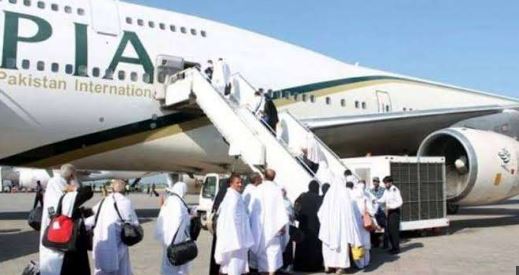 ISLAMABAD, JUN 05 (DNA) — First Hajj flight under government scheme will depart from Islamabad tomorrow (Monday). According to spokesperson of Ministry of Religious Affairs, 32,000 pilgrims will be flown to Saudi Arabia via 106 Hajj flights.

The spokesperson said forty-two flights will be operated from Islamabad under Road to Makkah project. Hajj pilgrims are also being informed about the flights through the website and SMS on their mobile number.

The first flight of the Hajj operation will depart at 03:30 in he morning on June 06. The second flight will also fly from Islamabad airport at 08:30 AM. Prime Minister Shehbaz Sharif is also expected to arrive on the occasion.

The first Hajj flight from Multan will leave at 4:30 in the evening on June 06, while from Lahore at 1:55 AM in the night. All special and government Hajj flights from Peshawar, have been re-route through the Islamabad airport.

The Saudi Arabia has launched the ‘Road to Makkah’ initiative in five countries including Pakistan, Malaysia, Indonesia, Morocco and Bangladesh. The country’s ministry of interior said that the “Road to Makkah” initiative aims to receive Hajj pilgrims and complete their procedures from their countries with ease.

It starts with issuing the visa electronically and taking the vital characteristics and then passing through the complete passport procedures at the airport of the country of departure after verifying the availability of health requirements.