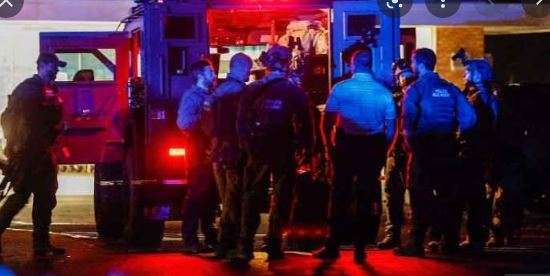 Washington, Oct 14: A shooting Thursday in North Carolina’s capital Raleigh left at least five people dead, including an off-duty police officer, officials in the southeast US city said, adding that a suspect had been captured.

Raleigh Mayor Mary-Ann Baldwin said the shooting occurred near the Neuse River Greenway, a popular trail in the area.

“This is a sad and tragic day for the city of Raleigh. Just after 5:00 pm today, multiple people were shot,” she told a press conference.

The Raleigh Police Department “has confirmed five fatalities. One of them was an off-duty Raleigh police officer.”

The mayor had earlier reported that the shooter was being “contained in a residence in the area” by police.

Also among the wounded was a canine officer who had been taken to the hospital, although Borneo reported that an injured police officer had been released.

When asked about a motive for the shooting, he said it would likely “come to bear” in the coming days.

“The nightmare of every community has come to Raleigh. This is a senseless, horrific, and infuriating act of violence that has been committed.”

Gun violence is a major problem in the United States where more than 34,000 people have died in shootings so far in 2022 alone, more than half of which were from suicide, according to the Gun Violence Archive website.

“We  must do more,” Baldwin told the press conference. “We must stop this mindless violence in America. We must address gun violence. We have much to do, and tonight we have much to mourn.”

The North Carolina shooting occurred after a jury earlier in the day rejected the death penalty and backed life imprisonment for Nikolas Cruz, who shot and killed 17 people at a Florida high school in 2018.

Mass shootings have repeatedly stunned the nation, reigniting debate on gun control, a hot-button cultural issue that has made little headway in Congress.

However, several of the most recent gun rampages, including a shooting at a school in Texas and a supermarket frequented by African-Americans in New York state, caused particular shock across the country, prompting lawmakers to agree in June, for the first time in 30 years, to pass modest reform of gun control laws.

Nearly 400 million guns were in circulation among the civilian population in the United States in 2017, or 120 guns for every 100 people, according to the Small Arms Survey project.