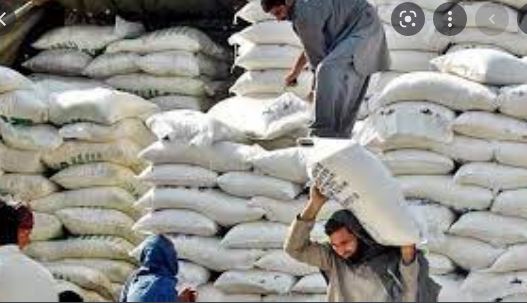 ATTOCK: The flour crisis looms large over twin cities of Taxila, Rawalpindi and Islamabad as the flour millers have announced to boycott the official wheat quota to register their protest against unjust distribution of wheat to the flour millers.
A meeting of The Pakistan Flour Mills Association (PFMA)  Punjab chapter which was held on Saturday announced that the over two dozen flour millers have unanimously decided to not to buy the official wheat from the Punjab food department  after the newly introduced wheat quota policy by the Rawalpindi district administration.
The share of the rural population has been completely ignored in the policy, they observed. They were of the view that the share of flour products in grinding has been altered illogically. They further alleges that the food department officials rather tried to create a division among the millers “only to conceal their incompetence and follies” and demands that   Punjab Chief Minister should take notice of the situation.
They were of the view that to accommodate the favorite flour mills of Rawalpindi, the wheat daily quota of flour mills of twin cities of Taxila and Wah, many of which depend on the official wheat quota for their operations, was slashed which would affect the wheat supply  in the area. Therefore, they said, it has been decided that flour mills will not lift the official wheat quota from Saturday which would lead to imminent shortage of the commodity. The association   warned that they could extend the boycott to the entire province if the issue was not resolved.
Vice Chairman PFMA Punjab chapter Atif Nadeem Mirza has claimed that population has been made the basis for the distribution mechanism which is against the ground realities. He was of the view that being a stakeholder they should have been not taken into confidence in policy formulation. He said that the PFMA had already informed the government about the prevailing scenario and suggested possible measures to check the increasing price of flour in the market.