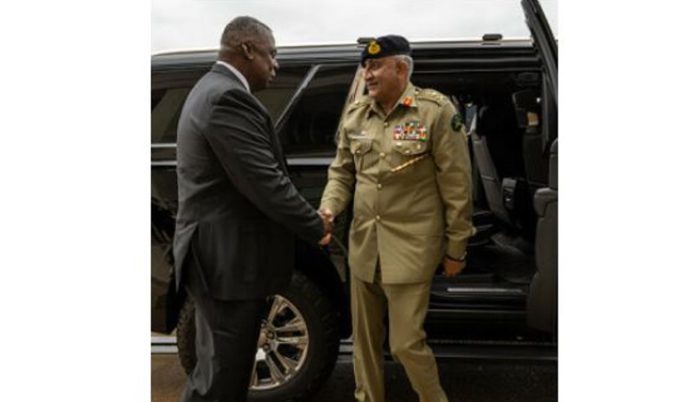 WASHINGTON: Chief of the Army Staff Gen Qamar Javed Bajwa left for home on Wednesday evening after a five-day visit to the United States, which is being interpreted by the international media as part of an effort to reset US-Pakistan ties.

While the international media focused on issues like Pakistan-US ties, India-Pakistan and Pakistan-China relations, the media in Pakistan showed more interest on the possible impact of the visit on the country’s internal politics.

Another issue that was in focus was the timing of the visit, with many questioning why the army chief came to Washington towards the end of his tenure.

Tamanna Salikuddin, who worked for the State Department and the US National Security Council for 12 years before joining the US Institute of Peace as the head of their South Asian program, however, disagrees with the speculations about the timing.

‘People in Pakistan are looking for some signals, some dots to connect, that are not there,” she told.

“I think this was a long-planned visit and this visit has been long delayed. It was scheduled and rescheduled many times.”

Commenting on media speculations in Pakistan, she said: “I don’t think it has any connection to his retirement date.”

She said that no one in the US administration would give an endorsement or deny an endorsement” to an extension to his tenure. Absolutely not. Conspiracy theories sell in Pakistan very well, but it so far from the truth.”

Michael Kugelman of the Wilson Center, Washington, noted that Gen Bajwa came “during what will likely be the last few weeks of his final term as Pakistan’s army chief” but did not say why.

Marvin Weinbaum of the Middle East Institute, Washington, regretted the trend in Pakistan to tag everything to domestic politics.

“In place of the unity needed to deal with Pakistan’s twin humanitarian and economic crises, confrontational politics goes on as usual,” he wrote.

In its report on the visit, Al Jazeera noted that efforts to improve ties began in July and since then several senior US officials and members of Congress have visited the country in the aftermath of the floods. So far, the US has also provided $66m in aid.