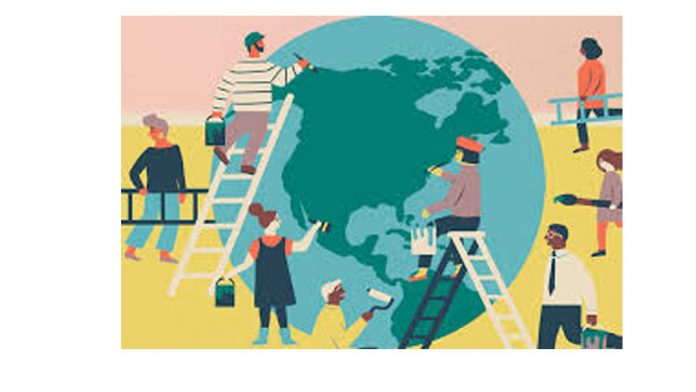 As a woman of 21st century, that’s ironic for me to watch, how the efforts to bring women from periphery to center of foreign policy still make headlines. Despite coexisting with men ever since Adam and Eve, daughters of Eve-the other half of world population-have long been ignored in crafting policies related to the same world they share with their male counterpart.

International relations reflect a world of men in which, they influence international affairs through their physical capacities, through their (masculinist) practicesat institutional level and through the symbolic links between masculinity and power.

For centuries, gender equality and human rights have remained secondary issues or matters of low politics in patriarchal realm, but this century has seen unprecedented rise of global activism specially for gender equality which urged policy makers to consider the relevance of gender sensitive policies.

Women in key decision-making positions were traditionally treated in three ways. They were either ignored altogether, portrayed as overpowered or presented as underpowered and lacking the capacity for high-level roles. However, the rise in number of women successfully serving executive posts is negation of previously self-assumed stereotypes.

In September 2018, Canada and the European Union co-chaired the first ever meeting of female foreign ministers; eighteen of the almost thirty serving female foreign ministers attended, from countries spanning five continents. Past few years have seen surge in numbers of women running for office around the globe even in war-torn countries like Afghanistan and Iraq. 417 female candidates appeared in 2018 for Afghanistan parliamentary elections 2,011 in Iraq 111 in Lebanon and US had also seen unparalleled female candidates running for statewide office in 2018, over 500 women ran for Congress. Pakistan and India, usually at odds but shared the same trend ofincreased women participation in politics. Both have witnessed a record-breaking number of females running for office in last elections; 183 women contested for parliamentary elections in Pakistan and 700 women contested for Lok Sabha.

The two dominant gender identities; men and women share entirely different traits, masculine traits include aggression, competitiveness, dominance, independence, and a willingness to defend one’s beliefs at any cost, typical feminine traits are compassion, tenderness, warmth and sensitivity to the needs of others. We are not living in a perpetual peace nor it’s a war like situation, cooperation and conflicts are running parallel which require both the competitiveness of men and the compassion of women. In 2014, Swedish government adopted a so-called feminist foreign policy, since then, only few countries including Canada, Mexico and France has followed the suit and other handful countries which include Malaysia, Spain and Luxembourg have intentions to develop similar policies. Sweden’s foreign minister, Margot Wallström explained feminist foreign policy as, “striving toward gender equality is not only a goal in itself but also a precondition for achieving our wider foreign, development, and security-policy objectives”.

The addition of more women to the tables of policy making can make this world a better place, why? Because women are more pacifist than men, they oppose violence, sensitive towards casualties, opt peaceful means to end conflicts and turn out to be dovish politicians.Francis Fukuyama claimed that “a world run by women would follow different rules”: it would be “less aggressive, adventurous and competitive.”Research by US think-tank Council on Foreign Relations shows that women’s participation in conflict prevention and resolution can improve outcomes before, during, and after conflict because women are often perceived as ‘honest brokers’.With the presence of women in conflict resolution, parties are more likely to reach sustainable agreements, peace agreements are 64 percent less likely to fail, peace agreements are 35 percent more likely to last at least fifteen years and narrowing the gender gap can decrease interstate and intrastate conflicts. The collaborative approach of women to peace-making and their ability to organize themselves across cultural and sectarian divide, increase the prospects of long-term stability and reduce the likelihood of state failure, conflict onset and poverty.Closing the gender gap in workforce participation could add as much as $28 trillion to the global GDP. Feminist foreign policy approach aims to unlock the potential of half of the world population, so, theimproved status of women promises real benefits in every sector and it’s a win-win situation for all.

Rhetoric and shallow promises will not reap those marvelous benefits of gender-equality, states must be held accountable for their work; they should commit to issuing public annual reports that assess progress toward time-bound and measurable goals along the road to equity.Most of the countries have dedicated their resources to ensure gender equality in every sector, some of them are following specific plans and 83 countries have adoptedUNSCR 1325 National Action Plans (NAPs) to encourage women participation in peace and security processes. Unfortunately, Pakistan is not among those countries, despite of the fact that it was once led by Benazir Bhutto; the strongest and the only woman to lead Pakistan both in her life and death. Critics doubt the rewards of addition of more women to policy making and the durability of feminist policies, they are also skeptical of any links between women in executive positons and stirring outcomes. It’s true that there are few examples which validate the encouragingimprints of more women to the policy making tables, their efficiency to reshape peace agreements, aid infrastructure, decrease militarism or more stable economic policies. As a matter of fact, these matters depend on the nature of institutions rather than individuals and these institutions have remained male dominated for centuries, it’s not a cake walk for women to just walk in and make some space for themselves in such well-established patriarchal settings.It’s too early to negate or authenticate these viewpoints, because it’s not been a century since women won the right to vote and unfortunately, many of them are still struggling to exercise this basic right.Even in such challenging environment, women have proven themselves worthy of executive positions, as leaders of states, as fighters in battlefields, as heads of global institutions and on the international trade and environment portfolios. Keeping in view the brief history of women in these areas and their extraordinary performance over such a short period of time indicates that this may not be necessarily long but definitely a rewarding road.