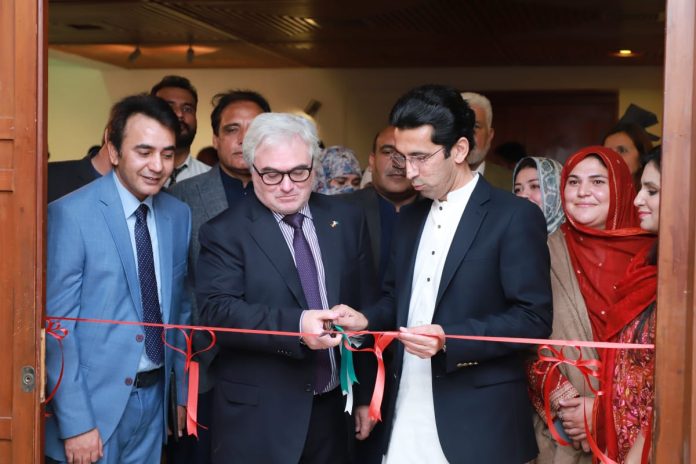 ISLAMABAD: The week-long exhibition is showcasing the efforts of integrating the Merged Areas into Khyber Pakhtunkhwa, the region’s rich culture and potential as well as Germany’s support to its Pakistan counterparts in local governance, health and education.

To mark the development cooperation between Pakistan and Germany, GIZ Pakistan and the Embassy of Germany in Islamabad jointly launched a photo exhibition on the Merged Areas of Khyber Pakhtunkhwa in Islamabad. The exhibition is being held at the Pakistan National Council of the Arts (PNCA) from the 8th to 13th of December.

Some 150 representatives and officials of the Khyber Pakhtunkhwa (KP) Government and its line departments, the German Embassy, the European Union, donor agencies, Members of KP’s Provincial Assembly, implementing and development partners, academia as well as the media attended the inaugural ceremony of the photo exhibition.

Various photographers have contributed to this photo exhibition, most notably Mr. Abdul Majeed Goraya of Peshawar and Mr. Alamgir Khan of Mohmand in the Merged Areas. Their pictures show people following their trades, earning their livelihoods and striving to provide their children with a better future. The photographs also illustrate an emerging local governance system, community development initiatives, women standing up for their rights, and improvements in the education and health sectors.

Speaking at the inaugural ceremony, guest of honor, Mr. Shahram Khan Tarakai, Minister of Elementary & Secondary Education of Khyber Pakhtunkhwa expressed his gratitude to the German Government and the European Union for their support to the province in various fields of development. “The Government of Khyber Pakhtunkhwa is highly valuing the partnership with GIZ Pakistan and the joint work in areas such as good governance, education and health. This has lead to major changes in the lives of the people in the Tribal Districts and has contributed to reduce the development lag. Our cooperation has also enhanced public trust in government institutions and has helped to improve public services.” Among the important achievements, he listed improved school curricula, the training of over 5,000 members of Parent’s Teacher Councils, capacity development for over 3,000 managers in the health and educations sectors, as well as training of several hundred officials of the Local Government Department.

In his opening remarks, Ambassador of the Federal Republic of Germany, Mr. Alfred Grannas, highlighted that “the photo exhibition and its catalogue not only offer vibrant insights into the regions’ history, its rich and diverse culture and traditions, but also into the lives of the of the people and their development needs.” He pointed out the long-standing and successful development cooperation between Germany and Pakistan over a period of 60 years during which countless development projects have been implemented. This cooperation has over the decades been continuously adapted to meet new challenges and changing social, economic and ecological conditions, he said. “The FATA Development Programme is also an example of joint European efforts in the field of development. Over the years the program with its budget of almost 40 million Euro was co-funded by the Government of France, the Government of Switzerland and currently by the European Union.”

In his address to the audience, Mr. Karim Kettani, Head of the Finance and Audit Section at the European Union Delegation to Pakistan, outlined that the European Union’s programme “Aid to Uprooted People”, which has been implemented by the GIZ’s FATA Development Programme since 2017, has supported the KP Education Department in improving education for internally displaced and host communities in the Merged Areas. “With the programme’s support, the Government of KP has allocated 2.544 billion rupees for school improvement through community-driven development”. He added that EU support to Pakistan amounts to around 172 million Euros to boost sustainable and inclusive growth, modernizing agriculture and improving inclusive access to resources.

Mr. Irfullah Wazir, Special Secretary of the KP Local Government, Elections and Rural Development Department said that following the merger of erstwhile FATA into KP Province, the Provincial Government has been striving to bring these areas at par with the Settled Districts. “It is challenging to inspire the trust of the 5.5 million people living in the Merged Areas in the recently introduced Local Governance System. I am thus extremely thankful for the extensive support of our international partners, including the German Government and the European Union, for their contributions in making local government’s more efficient. GIZ’s FATA Development Programme has supported us in improving sector governance in the fields of health and education and in training the newly elected councillors to assume their responsibilities in developing their constituencies.”

Dr Peer Gatter, Head of the GIZ-implemented FATA Development Programme, thanked the programme’s counterparts in KP’s government and in civil society for 13 years of trustful cooperation. “We have assisted the Provincial Government in the challenging task to make the Merged Areas’ integration into the Province of Khyber Pakhtunkhwa a success. With development plans launched for all administrative divisions of the Merged Areas, with an education strategy being implemented and the infrastructure of over 5,000 schools having been improved, with girls’ education being fostered through Parent-Teacher Councils, and with quality standards in place in health centres across the Merged Areas, I believe that together we have achieved significant results”. The aim of the exhibition, Peer Gatter explained, is to allow the Pakistani public and the donor community insights into the tribal districts of Pakistan, a region that in the national and international press alike, is often reduced to violence and conflicts. “The lives of the people, their hopes and aspirations and their struggle to develop their communities, is often forgotten”.

Dr Riffat Sardar – Chairperson of the Khyber Pakhtunkhwa Commission on the Status of Women in her remarks expressed her appreciation to GIZ for its support in empowering women in the province of KP.