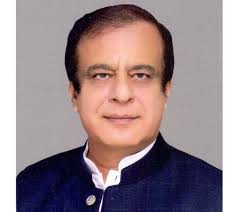 ISLAMABAD, Oct 23 : Minister for Information and Broadcasting Senator Shibli Faraz Friday expressed satisfaction over the economic team’s performance under the hard working leadership of Prime Minister Imran Khan and assured that inflation of essential commodities in the country will be controlled soon.

In an interview with a private news channel, he admitted that there was price hike in the country but the overall ecnomic condition was far better than other countries after Covid-19 situation and Prime Minister Imran Khan was making hectic efforts to strengthen the economy and taking effective steps to control inflation in the country.

He mentioned that his government had taken some hard decisions due to coronavirus pandemic that damaged the economy of many countries around the world.

The minister said owing to various initiatives of the government, the country was achieving economic stability adding that the prime minister was committed to the accountability of all the corrupt elements.

The people were siding with the institutions and had rejected the nefarious narrative of the opposition, he

He said that the corrupt elements were targeting Prime Minister Imran Khan who was upright and honest with the nation.

He assured that the good times were ahead and said that the opposition was bound to fail as their politics was now over and they were badly exposed in front of public.

While condemning the “drama” staged at the Quaid-i-Azam’s mausoleum by Safdar Awan, he regretted and asked the PML-N leaders for an apology.

He further criticized PML-N leaders and said the party’s thugs only want to create chaos and uncertainty in the country for saving their leader’s looted wealth, adding, the opposition should shun negative politics as it was weakening the national unity.

Replying to another question, Shibli Faraz said holding investigation about the Karachi incident was the responsibility of the provincial government and PM Imran Khan had no concern with this issue.

Talking about the Supreme Court’s order to make a decision within a month about establishing 120 accountability courts throughout the country, he replied that around 20 special courts would be functional soon as the work was already started and he also hoped that all delaying and pending accountability cases would be finished soon with speedy justice.

Minister for Information added that the government would not make any compromise on the accountability of the corrupt.

It was not afraid of the opposition’s threatening movement.

He said it was for the first time in the country’s history that powerful people were being held accountable and there was no doubt that public support was with policies of Imran Khan’s government.