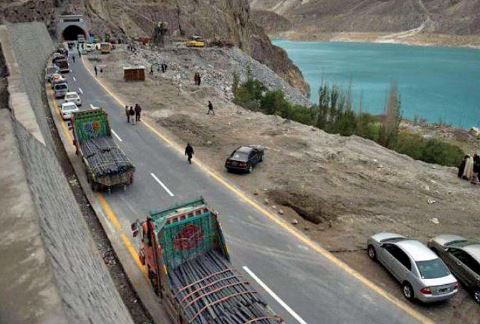 ISLAMABAD, Jun. 11 (DNA): Federal government unveiled a Rs727 billion development program, with Rs118 billion set aside for new and ongoing connectivity projects under China-Pakistan Economic Corridor (CPEC), Central Asia Regional Economic Cooperation (CAREC) Program and Khyber Pass Economic Corridor (KPEC).
According to Gwadar Pro, bulks of funds have been earmarked for road projects along the western alignment of CPEC. The majority of these projects are underway in Balochistan to connect northern and eastern parts of the country with the Gwadar port.
The government has also kept funds for feasibility study of an expressway project to link Pak-Afghan border point of Ghulam Khan in KP to CPEC’s M-14 Motorway, the shortest link for Kabul with the Gwadar port.
Among the prominent CPEC projects, Rs 16 billion has been earmarked for upgrading the existing national highway between Dera Ismail Khan District of KP and Khuzdar District of Balochistan into a dual carriageway to link CPEC’s M-14 and M-8 motorways.
These projects will drastically reduce travel time between Islamabad and the Gwadar port. Another Rs2 billion has been set aside for Nokundi-Mashkhel Road in Balochistan under CPEC.
Similarly, Rs 7.8 billion has been allocated for two sections of M-8 Motorway in Makran and Kalat divisions of Balochistan. M-8 linking Sindh with Gwadar and several sections of this east-west motorway is  already operational.
Also, over Rs 6 billion has been allocated for different projects to connect Gilgit with Chitral to provide an all-weather CPEC corridor in northern parts of the country. Rs 1.4 billion has been set aside for Havelian-Thakot section of Karakoram Highway, an extension of CPEC’s Hazara Motorway.
The government has also kept Rs 6 billion for upgrading the existing N-25 highway into a double carriageway. The road links Karachi with Gwadar, Quetta and Pak-Afghan border point Chaman in Balochistan.