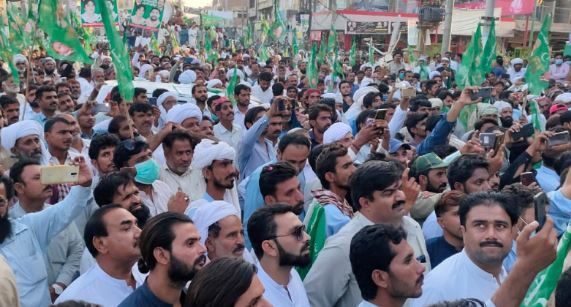 Both the government and the opposition had announced to hold rallies at the D Chowk thus sending shock waves among the general public and especially the diplomatic community based in Islamabad. People had feared a clash between the opposite forces thus causing colossal loss. The situation was indeed grim and dangerous. But then the Supreme Court of Pakistan helped defuse the tension. The apex court advised both parties that they should choose any other venue adding if both parties gather at the D Chowk, it may be harmful for the workers of both parties. Sanity prevailed and both the government and the opposition decided to shift their venues.

Now the government has planned its procession at the Parade Ground while the Opposition shall be allocated a space near Sector H 8, which is close to the Zero Point. After the intervention of the superior court an unseemly situation was avoided.

In another development the government has filed reference in the apex court seeking SC guidelines about Article 63 A of the constitution, that deals with the floor crossing. The government has raised four fundamental questions in its plea, which is to be taken up on March 24. The Court has promised to hear the case on a day to day basis so that a verdict could be announced before the no trust vote.

It would be good to see this matter debated in the Supreme Court as Pakistani politics is fraught with the instances of floor crossing and buying and selling of the members of the parliaments. When it comes to this sort of trade, all parties are to equally share the blame for all of them having been involved in this nasty business. It would be quite befitting if the Supreme Court takes up this issue in a retrospective manner so that incidents that took place in the past could also be addressed.

Quite recently, we witnessed some undesirable scenes during the election of the Chairman Senate, who got elected despite being in minority and then PPP leader Yousaf Raza Gillani got elected as Senator from the National Assembly of Pakistan, where government had the majority and thus its candidate Hafeez Shaikh should have won that seat. But it did not happen – courtesy horse trading!! This is a time that this menace is dealt with effectively so that such bad occurring does not take place in future.