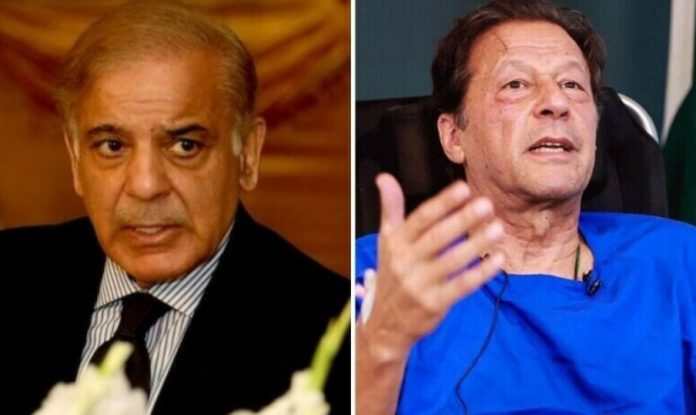 ISLAMABAD: Prime Minister Shehbaz Sharif said on Monday that PTI chairman Imran Khan’s rebuttal of the foreign conspiracy narrative was a reminder of the “vicious role he played to harm Pakistan’s external relations while pursuing his own petty politics”.

In an intervie w with British newspaper Financial Times, Imran — who has repeatedly claimed that a US-backed conspiracy was behind his ouster in April — said he no longer “blamed” the US administration for his removal from power.

The PTI chief also said he wanted a “dignified” relationship between Washington and Islamabad.

“As far as I’m concerned it is over, it’s behind me,” the newspaper quoted Imran as saying. In a tweet today, the premier said that the nation was shocked by Imran’s “deceit and treachery inflicting irreparable damage on Pakistan”.

Meanwhile, Information Minister Marriyum Aurangzeb, in a series of tweets, said that the former premier will have to provide an answer for the apparent change in his narrative.

She addressed Imran and said that putting the matter behind him would not suffice.

“You will have to give an answer for the narrative on the basis of which lies and chaos were spread in the country,” she said, adding that withdrawing the claims without giving an explanation would not be enough.

“Today is a question mark for all those who believed what Imran said.”

Lambasting Imran for “playing with national interest”, the information czar said the former PM cannot get rid of all the accusations by saying “it’s behind me”.

“After destroying the country with his lies, Imran is now telling everyone to forget the US conspiracy narrative,” she said.

“Does Imran think his supporters are sheep and goats?”

The PML-N minister said the PTI chief is backtracking from his narrative of US conspiracy, imported government and the regime change operation because it never existed in the first place.

“Today, Imran Khan has given up on his narrative of imported government and regime change,” Marriyum added, saying that the real face of the party’s so-called Haqeeqi Azaadi had been “completely exposed”.

The information minister accused Imran of putting the country’s foreign relations in grave danger for the sake of power.

“Imran played a dirty game with national interests in his lust for power. He pulled off tricks and put the country and its people at stake. After teaching lies to the nation, Imran now says that the US conspiracy is over.”

She questioned how Imran could tell everyone to leave the US conspiracy narrative behind when he had kept appealing to the Supreme Court to take notice of it.

Climate Change Minister Sherry Rehman also termed Imran’s recent claims as the “mother of all U-turns”.Separately, addressing the parliament later in the day, Defence Minister Khawaja Asif said Imran should not be allowed to go scot-free after the series of allegations levelled against the “imported” government for coming into power through a “US conspiracy” and a “regime change operation.”