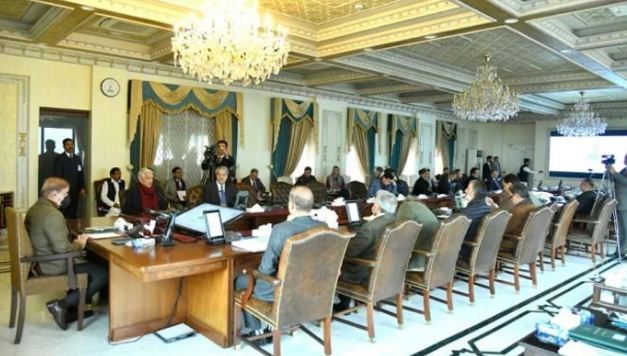 ISLAMABAD, JAN 24: A day after the massive breakdown hit the country which left more than 220 million people without electricity and incurred tens of millions of dollars in industry losses, the federal cabinet directed the authorities concerned to devise a comprehensive strategy to prevent such a widespread blackout in the future.

The outage occurred on a winter’s day when temperatures are forecast to fall to around 4 degrees Celsius in Islamabad and 8 degrees Celsius in Karachi. According to details, the country experienced a major blackout when a fuel conserving measure by the authorities went wrong.

During an interaction with local media on Monday, Energy Minister Khurram Dastgir said: “As an economic measure, we temporarily shut down our power generation systems [Sunday night].” He added that when the engineers tried to turn the systems back on, a “fluctuation in voltage” was observed, forcing the officials to shut down the power grid stations.

The cabinet meeting chaired by Prime Minister Shehbaz Sharif approved a nationwide public awareness drive on the conservation of power, water, gas and other resources to make the people develop such habits.

The meeting also called for inclusion of the subject of best international practices on energy conservation in the educational curriculum.

It was told that energy conservation efforts at the public, private, domestic and commercial levels would help reduce the import bill of petroleum products which had increased remarkably during the last seven years.

The prime minister, expressing annoyance over the widespread power breakdown on Monday, said the inconvenience caused to the people was unacceptable and would not tolerate such happenings in the future.

Premier Shehbaz also called for fixing the responsibility of the power outage which had caused difficulties for the masses as well as the business community. He also instructed to identify the factors behind the power breakdown and take necessary measures to prevent its recurrence.

The cabinet meeting was told that a committee formed by the prime minister had started functioning which would furnish a comprehensive report after deliberating over all the factors.

The participants of the meeting told that all major 1112 grid stations were also restored by 0500 hours on Tuesday morning to ensure power supply to the consumers.

Federal Minister for Information and Broadcasting Marriyum Aurangzeb gave a detailed briefing to the cabinet on National Awareness and Communication Strategy for Energy Conservation under which a long-term awareness drive would be launched.

She told the meeting that, prior to the drive, the information ministry carried out the first comprehensive survey to seek public opinion on the energy conservation. Considering the public behaviour, the ministry prepared an awareness drive which would focus on developing people’s habits, lifestyle and bahaviour for energy conservation.

The federal cabinet appreciated and approved the information ministry’s awareness drive and instructed for its early launch, also asking other ministries to extend their support.

The prime minister directed taking the caretaker governments of Punjab and Khyber Pakhtunkhwa into confidence on the energy conservation plans to ensure their effective implementation.

In a press conference in Islamabad earlier, Dastgir said that the entire power system was fully restored at 5:14am across the country, but noted that despite the restoration, there would be a shortage of electricity for the next two days as the nuclear power plants required 48-72 hours to start supplying electricity to the system.

Similarly, the energy minister said that the coal power plants required around 48 hours for synchronisation. He said yesterday, one unit of Sahiwal and Engro Coal Power plant each has also started work.

There would be a shortage of electricity for the next 48 hours and limited power load-shedding would be carried out, he added.

However, he made it clear that industrial consumers would be exempted from the power load-shedding as per the “policy of the incumbent government”.