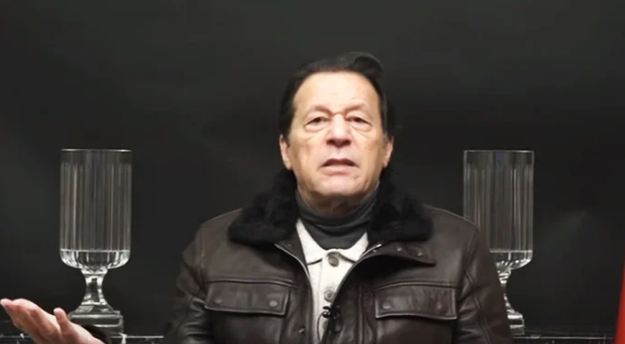 ISLAMABAD: /DNA/ – Pakistan Tehreek-e-Insaf (PTI) Chairman Imran Khan came down hard on the imported government’s ministers for issuing irresponsible statements against the Taliban-led Afghan administration in the backdrop of rising terrorism, warning that if the new Afghan government decided to stop cooperating with Pakistan, it could lead to a “never-ending” war against terrorism.

Addressing a seminar on the resurgence of terrorism in Pakistan via video link on Tuesday, PTI Chairman said that the government of crooks was not serious in dealing with the issue of terrorism, as they were more interested in ending their corruption cases due to which terrorism was rearing its ugly head again.

Imran Khan said that the imported government’s non-serious attitude clearly reflected from the ministers’ irresponsible statements that they were planning to attack Afghanistan.

He said that the coalition government was not focusing on talks with its Afghan counterpart as Bilawal was roaming around the world but had no time to visit to neighboring country to find out amicable solution to stop the reoccurrence of unfortunate incidents at the Pak-Afghan border.

PTI Chairman warned that another war against terrorism would become a curse for the country if relations with Afghanistan deteriorated.

He went on to say that the imported stopped development funds for the war-ravaged merged tribal areas and even the provinces did not give the promised shares of the NFC award to the ex-FATA, which was once considered the most peaceful region. He noted that creation of opportunities could keep the tribal people at bay from falling into hands of terrorists.

He said that the rise in terrorism in the country would hit KP the hardest, noting that the country’s tribal belt suffered the most during the last wave of terrorism.

“I pay tribute to the people of KP who came to the streets against terrorism,” he added.

He pointed out that the federal government did not invite KP chief minister in the recent meetings of National Security Councils (NSC).

Imran Khan urged the government to brainstorm on the evolving situation, because Pakistan cannot sustain another wave of terrorism.

Talking about the peace talks with TTP by PTI government, PTI Chairman said that his opponents should not lie to the people, as all stakeholders had sat down and were informed about the need for talks with the TTP and the plan to resettle their members. “Military operations can be part of the overall peace settlement but they “never” bear fruit. He urged that the government should engage with the Taliban to avoid terror activities on Pakistani soil.

“We had a golden opportunity after the US troops withdrawal from Afghanistan; we tried to better our ties with the Ashraf Ghani government as best as we could and decided not to intervene in Afghan affairs,” he added.

Imran Khan stated that when Taliban seized the power, Pakistan was also kept engaging with them, and we helped evacuate foreigners from Afghanistan.

He said that the TTP issue could be solved at that time since the new Afghan government was pro-Pakistan and could exert influence on the TTP. He said that after the Taliban came into power, they asked the TTP to return to Pakistan.

This was the time he said when peaceful settlement was required the most, he said. However, he said that the imported government mismanaged the issue altogether.

Imran Khan stated that the ill-equipped police cannot confront the rising wave of terrorism, as the terrorists were well-equipped with modern weapons that the US left behind.

He said that the federal government would need to tread carefully and seek KP’s input on the overall terror situation. Imran Khan lashed out at Bilawal for seeking US help against terrorism and warned that Pakistan should not seek help from the US as it would lead to internal discord among locals if drone attacks were carried out.

“Pakistan have already suffered the most due to support to the USA and I was criticized over my statements against the support,” he added. “Not a single Pakistani was involved in 9/11 but Pervez Musharraf plunged the country into a war for which the country suffered immensely,” he added.

PTI Chairman demanded a national consensus policy against terrorism and warned that if the government did not show seriousness, chaos would spread in the country.

He said that Pakistan had suffered a lot already due to its participation in the USA’s war against terrorism for 20 years. Imran Khan stated that he was of the opinion that the country should have remained neutral, adding that by doing so, enemies of Pakistan could have not got the chance to use the situation to their advantages.

Imran Khan said that the most destructing were the suicide bombing and even USA suffered the most as they didn’t have any solution to such attacks.

Imran Khan came down hard on the imported government for begging in front of the world, adding that Pakistan’s economy never suffered this much in history.

“If terrorism is not dealt with seriously, it could have dangerous consequences for the country and that too at a time when our economic conditions cannot bear it at all,” he warned.

Speaking on the occasion, CM KP Mehmood Khan said that PTI has been in power in KP since 2013. He said that all-out efforts were made to ensure lasting peace in the volatile province.

He said that all institutions were destroyed in former FATA and the PTI government was leaving no stone unturned to uplift the tribal districts.

Speaking on the occasion, Murad Saeed said that the US and West were making secret documents public after every 20 years; however we never brought the fact before the masses ever.

He said that when US was leaving Afghanistan there was apprehension of eruption of civil war in Afghanistan. Murad raised question as what happened all of a sudden that friendly neighboring country turned foe.

Murad reminded that during Imran Khan-led government, neither there was any military operation nor drone strike in any part of the country.

He said that the US started blaming other when it suffered defeat, adding that it was being said that Imran Khan should have not said absolutely not because it upset the US.

Murad stated that the US and its facilitators ousted Imran Khan’ government, adding that after regime change operation, the neighbor upset and terrorism started.