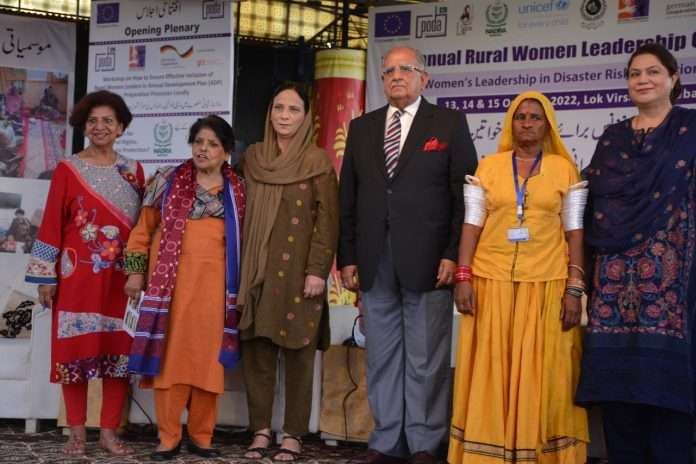 It’s consecutive15th Annual Rural Women Conference which has been organized by PODA – Pakistan with a focus on “Rural Women’s Leadership in Disaster Risk Reduction and Good Governance”. It is pertinent to mention here that since 2008, PODA-Pakistan has been playing central role to organize the conference in connection with the International Rural Women Day that is celebrated every year on 15th October following a United Nation’s Resolution (A/62/2007) passed in December 2007. PODA is a social organization working for the social, economic and political rights of rural women since 2004. Starting today (Thursday), the conference will be concluded on Saturday on award ceremony.

During the second half of the day Ahsan Iqbal, Federal Minister for Planning and Development informed the audience that in the month of November, Pakistan is planning to hold an international donor conference to get resources to expedite the reconstruction work in flood-hit areas of the country as it is beyond our resources. He also said that Pakistan bore the brunt of careless life style of the Western countries due to which Pakistan has been among the countries who would be impacted severely by climate change.  He also applauded the role of the civil society for playing their role in rehabilitation process. He assured the audience that gender perspective would be included in the rehabilitation plan.

Addressing the rural women representing four provinces and regions of Azad Kashmir and Gilgit-Baltistan, the Federal Minister for Human Rights Mian Riaz Hussain Pirzada said that although we belonged to a society where women were respected, however due to growing intoleranceand various other factors he would be presenting domestic violence’s bill in the National Assembly as it was scheduled intoday (Thursday)’s assembly agenda.

“Overall women’s participation in decision-making process at home and community level is low. If we want this to change, your voices need to heard loud and clear to claim your rights but also get a fair share of the wealth.” Mentioning a report he said that violence against women is high at places where poverty is high.

Welcoming the rural women and lauding the effort of PODA-Pakistan to organize the conference in the times of floods and political turmoil, Mrs. Nilofer Bakhtiar, Chairperson National Commission on the Status of Women highlighted the miseries of the women of flood-hit areas, especially of Sindh where flood waters would months to recede. She stressed on the need to empower and support rural women to build their resilience to reverse the impacts of natural calamities in an effective manner.

Dr. Shahida Rehmani, MNA and Secretary Women Parliamentary Caucus (WPC) andDr. Zarina Salamat, Chairperson, PODA highlighted the need to recognize the role of rural women while acknowledging their diverse and impactful roles and contributions in the society. Dr. Zarina said that the policymakers should devise practical solutions to focus on the education needs of the children of the flood-hit areas.

Welcoming the participants, Reema Aftab, Director General, Inclusive Registration NADRA said CNIC is primary and basic requirement for women to play their role in the society to access social benefits and their rights.

Various speakers and participants of the conference highlighted the need to take special care of children’s health and educational needs, as these issues tend to be ignored when such emergencies occur in a country. It should be relevant to mention here that Nobel Laureate Mohtarma Malala Yousafzai is in Pakistan to focus world attention on the flood-hit areas and is currently visiting Sindh urging the world to focus on the education needs of the children of the areas devastated by the current unprecedented flood. Malala Yousafzai was the one who attended PODA-Pakistan’s 2nd annual rural women conference back in 2009 when she was almost 11-years old. Sindh Government estimates that in Sindh around 12,000 schools and 3.5 million children’s education had been impacted by these floods.

Reciting her verses “Pakistan Khapaay.پاکستان کھپے(Long Live Pakistan)”on the plight of women of flood-affected areas, eminent poet Kishwar Naheed put her hand on the pulse of the audience. Her verses depicted portrayal of pregnant women and mothers trapped in floodsstruggling for the lives of their children both born and unborn, with the depiction of those people who helped flood victims like volunteers, young girls, rescue workers and soldiers who raised slogans “Pakistan Khapaay…”

Rural women leaders representing four provinces and regions of AJK and GB addressed the audience and reiterated their commitment to work for the rights of rural women through the platform provided by PODA-Pakistan. They included Bushra Tabbasum, Director SEEP, Muzzafarabad from Azad Jammu & Kashmir, Ms. Jamaite Baloch, Educationist from Lasbella, Baluchistan, Ms. Shirin Akhtar from Gilgit-Baltistan, Gulshan Bibi, South Waziristan,  Kyber Pakhtunkhwa, Veeru Kohlan, Hyderabad, Sindh isworking relentlessly to free bonded haris for the last more than two decades, and last but not the least Rani Shamim Akhtar, Nankana Sahib, Punjab who warmed the audience with her songs in Punjabi.

Stalls of various organizations were setup at the venue. Among them the prominent one was of ECP and NADRA to educate the participants on the process to cast vote and on how to get computerized national identity card and succession certificate respectively.