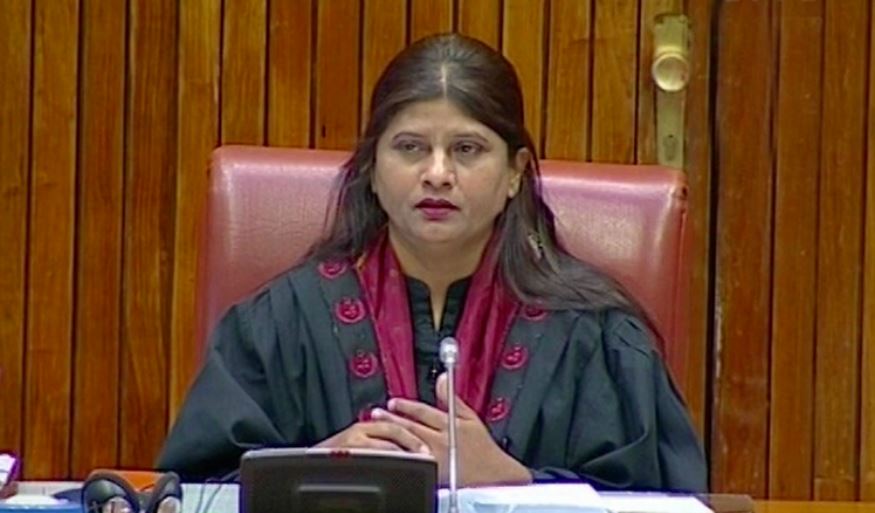 ISLAMABAD: The Senate on Friday unanimously passed a resolution to express solidarity with Kashmiris in connection with Kashmir Solidarity Day, which will be observed across the country tomorrow (February 5), during a session that was chaired by a Hindu senator.

Senator Krishna Kumari Kohli chaired today’s session and was welcomed by the loud thumping of desks as she sat on the chair’s seat.

“A Hindu presiding [over] the Senate session on Kashmir in Pakistan. Chairman Senate [asked] our colleague Krishna Kumari Kohli to do the honour. In connection with #KashmirSolidarityDay, it’s a strong message going out depicting [the] difference between Pakistan and Hindustan,” Senator Faisal Javed Khan said on Twitter.

In her own tweet, Kohli said it was a “great honour”.

“It is great honour [that] I chaired the Senate session called to discuss the current situation in Indian Illegally Occupied Jammu and Kashmir (IIOJK) on the eve of Kashmir Solidarity Day,” she said.

The senator, who was elected in 2018 to a reserved seat on a PPP ticket, thanked party chairman Bilawal Bhutto-Zardari for giving her an opportunity to become a member of the upper house of Parliament.

Kohli became the first Hindu Dalit woman to be elected to the Senate in 2018. Prior to becoming a senator, she was an activist in a village in Nagarparkar.

The resolution rejected the illegal and unilateral action taken by India on August 5, 2019, and demanded that it revoke the step, calling it a “gross violation of all United Nations resolutions on Jammu and Kashmir”.

The resolution also condemned the unabated Indian human rights violations, war crimes and violations of international humanitarian law in IIOJK. “Ever since Aug 5, 2019, hundreds of innocent Kashmiris have been martyred, arbitrarily arrested or rounded up under trumped-up charges,” the resolution stated.

It warned India that the worst form of state terrorism would not break the will of the Kashmiri people or crush their legitimate struggle.

Lawmakers demanded that Indian Prime Minister Narendra Modi and his “fascist RSS organisation” be held accountable for their crimes against humanity. The resolution also called on the Indian government to stop extra-judicial killings of Kashmiris in fake encounters and cordon-and-search operations.

It denounced the illegal Indian measures to change the demographic structure of the occupied territory as well as “efforts to peddle a facade of normalcy” and demanded the immediate release of all political prisoners in IIOJK.

The resolution called on the international community to take note of “India’s belligerence, intransigence and brazen persistence of cruelty against the Kashmiri people, including the danger of genocide which is now documented internationally”.

It reassured the Kashmiri people that the government, people and Parliament of Pakistan would always stand firm with them in their just struggle until it is resolved according to their wishes and as per the relevant UN Security Council resolutions.

“The Senate of Pakistan reiterates its support to the people of Kashmir in the just struggle for their inalienable right to self-determination every step of the way,” the resolution concluded.

Senate Chairman Sadiq Sanjrani will send a copy of the signed resolution to different world leaders and the UN secretary general.