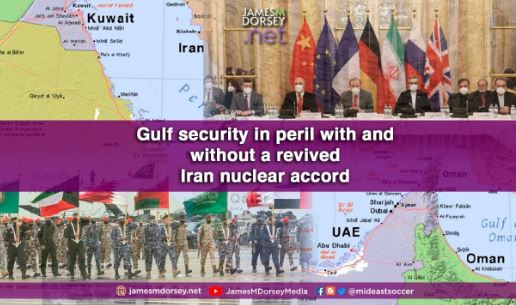 With the fate hanging in the balance of the 2015 international agreement that curbed Iran’s nuclear program, prospects for greater security and stability in the Middle East are meagre with or without a deal.

Undoubtedly, the region will be better off with a revival of the accord from which the United States walked away in 2018 than without a US and Iranian recommitment to the deal.

A recommitment could be only days away if European Union foreign policy chief Josep Borrell is right. Adding to the anticipation, US National Security Council spokesman John Kirby said the United States was also “cautiously optimistic.”

Even so, the impact of a revival is likely to be limited.

It is safe to assume that the covert war between Israel, bitterly opposed to a revival of the agreement, and Iran will continue irrespective of whether Iran and the United States recommit to the deal.

The war is being fought not only on Iranian and Israeli territory and cyberspace but also in other parts of the Middle East, including Syria, Iraq, Lebanon, Gaza, and potentially Yemen.

“Most leaders and senior officials in Israel’s current government believe that while Iran’s acquisition of such (nuclear) weapons will pose very serious security challenges, Israel is a regional power possessing a wide range of options for dealing with such challenges. Among these many options is a more explicit deterrence posture, utilizing the country’s alleged ‘nuclear option.’ Thus, in a recent event at Israel’s Atomic Energy Commission (AEC), (Israeli Prime Minister Yair) Lapid made reference to his country’s ’other capabilities,’ praising the AEC’s ranks and leadership for insuring Israel’s survival,” noted Israel scholar Shai Feldman.

Israel is, so far, the Middle East’s only nuclear state, even though it has never acknowledged its possession of nuclear weapons or signed the Non-Proliferation Treaty (NPT).

Gulf states share Israel’s concern that the agreement, at best, slows Iranian progress towards becoming a nuclear power and does nothing to halt Iranian support for allied non-state actors like Hezbollah in Lebanon, pro-Iranian forces in Iraq, Islamic Jihad in Gaza, and Houthi rebels in Yemen or Iran’s ballistic missiles program.

However, Iran has so far refused to discuss those issues. That could change if they were considered part of a holistic discussion of regional security. That, in turn, would have to involve all parties, including Israel and Turkey, and potentially be linked to security in the Eastern Mediterranean, the Caucasus, and South Asia.

Adding to the limited impact of a revival of the nuclear deal is uncertainty about the sustainability of the dialling down of tensions in the Middle East between Israel, Gulf states, Egypt, Turkey, and Iran.

The fragility of some of these relationships is evident in the slow progress of efforts to renew ties between Saudi Arabia and Iran; Turkey and Egypt; and differences and rivalries between various Middle Eastern players, including Turkey, Israel and Iran, and the United Arab Emirates and Qatar as they play out in countries like Afghanistan, Syria, Yemen, Libya, and Iraqi Kurdistan.

The fragility is evident in the lack of confidence complicating Russian-mediated efforts to achieve a rapprochement between Turkey and Syrian President Bashar al-Assad. Moreover, the Russian attempt reverberates in the Gulf, where Qatar and Saudi Arabia oppose UAE endeavors to return Mr. Al-Assad to the Arab fold, 11 years after Syrian membership in the Arab League was suspended because of the civil war.

Add to that the proxy war between Iran, Turkey, and Israel fought over the backs of Iraqi Kurds and Iraqi-Turkish tensions because of Turkey’s military operations in northern Iraq that target Turkish Kurdish rebels.

Recent rocket attacks on a UAE-owned oil field in northern Iraq persuaded US contractors to abandon the project for a second time. Nobody has claimed responsibility for the attacks.

Mitigating in favour of a firmer grounding of the reduction of regional tension is the fact that it is driven not only by economic factors such as the economic transition in the Gulf and the economic crisis in Turkey, Iran, and Egypt but also by geopolitics.

China and Russia have spelled out that they would only entertain the possibility of greater engagement in regional security if Middle Eastern players take greater responsibility for managing regional conflicts, reducing tensions, and their own defense.

Rhetoric aside, that is not different from what the United States, the provider of the Middle East’ security umbrella, is looking for in its attempts to rejigger its commitment to security in the Gulf.

The implication is that a transition is inevitable in the longer term to a multilateral regional security architecture that could still have the US as its military backbone.

The trend towards multilateralism will be driven as much by the strategic US focus on Asia, the effort to reduce European reliance on Russian energy in the wake of the invasion of Ukraine, and, ultimately, Chinese unwillingness to be dependent on a hostile US for its energy security.

The understandings and agreements between all regional states, including those that do not have diplomatic relations, such as Israel, Iran, and Saudi Arabia, needed to introduce a multilateral security arrangement would be paradigm-shifting and tectonic.

The sea change would have to be based on three principles enunciated this week by Indian foreign minister S. Jaishankar regarding his country’s relations with China that are equally applicable in the Middle East: mutual sensitivity, mutual respect, and mutual interest.

The understandings and agreements would have to involve credible abandonment of notions of regime change; recognition of the internationally recognized borders of all regional states, including Israel; non-aggression pacts; conflict management and conflict resolution mechanisms; arms control; a resolution of the Israeli-Palestinian conflict; and a nuclear free zone, to name the most difficult and seemingly utopian ones.

Given its ambition to play a more prominent role, India could significantly enhance its influence in the Middle East and set the tone if it were willing to join the admittedly troublednon-proliferation pact.

That would have to involve Pakistan also joining the NPT on the back of a genuine effort by both countries to resolve their differences and a halt to discriminatory anti-Muslim policies of the government of Indian Prime Minister Narendra Modi – steps that seem as impossible as the moves that Middle Eastern states would need to make.

The NPT’s shortcomings, beyond the refusal of nuclear states like Israel, India, Pakistan, and North Korea to join the treaty, were highlighted when signatories disagreed on a review of the 50-year-old pact last month.

Even so, a recent opinion poll in Saudi Arabia showed that India has some way to go in convincing the Middle East of its relevance compared to the United States, Russia, China, and Europe. Only 37 per cent of those surveyed believed ties to India were important to the kingdom.

India signalled its ambition to project power and membership in an elite club of nations with the commissioning this week of its first domestically built aircraft carrier, the INS Vikrant.

The biggest obstacle to a more stable regional security architecture is the deep-seated hostility and distrust between Israel and Iran against the backdrop of a seemingly inevitable nuclear arms race in which Saudi Arabia and Turkey would strive to obtain capabilities of their own.

That race will be accelerated if efforts to revive the Iran nuclear deal fail but will not be definitively thwarted if Iran and the United States recommit to the agreement.

The fact that the fate of Iran’s nuclear program is the switch at a Middle Eastern crossroads underscores the need to tackle sensitive issues head-on rather than kick the can down the road for opportunistic domestic political reasons.

It also highlights the need for a concerted regional and international effort and confidence-building measures inspired by the concessions they would entail. That, in turn, would require the political will to revisit issues without the debilitating lens of ideology, preconception, and prejudice.

Iran’s nuclear program is a case in point.

In the 1980s, Iran’s leaders revived the country’s nuclear program as a result of the Iran-Iraq war. The program was originally initiated in the 1960s by the Shah and initially put on hold in the wake of the 1979 Islamic revolution.

However, the war persuaded Iran’s leader that the program could be a deterrence against perceived US efforts to change the regime In Tehran. The conviction that the United States and the Gulf were seeking to topple the Islamic regime was cemented by their support for Iraq’s eight-year war in which Saddam Hussein, a no-less brutal leader than Iran’s revolutionaries, deployed chemical weapons.

The Gulf war also sparked the Islamic republic’s ballistic missile program and its interest in developing a chemical weapons capability. Iranian leaders’ willingness to work with Israelis suggested they were not picky in choosing whom to cooperate with to achieve their goals.

To be sure, the knife cuts both ways. Iran’s declared ambition to export the revolution, coupled with the 444-day occupation in 1979 and 1980 of the US embassy in Tehran, was destined to provoke a response.

Yet, when Iranian leader Ayatollah Ruhollah Khomeini in 1988 swallowed the “poison” of agreeing to a ceasefire with Iraq in a war that Iran had not started, nationalism had largely replaced revolutionary zeal.

The subsequent emergence of pro-Iranian militias in various Arab countries was part of a defense and security strategy designed to take the fight to Iran’s detractors and an effort to ensure Iranian regional influence rather than export the revolution per se.

Whatever the case, the reality is that Iran today is at the very least close to becoming a nuclear threshold state and will be one with or without a revival of the nuclear accord. That does not mean that the agreement has become irrelevant. On the contrary, its fate, no matter how flawed or problematic the agreement may be, will shape regional security in the foreseeable future.

It will determine the environment in which confidence can or cannot be built, and understandings can be achieved on sensitive issues without which any attempted multilateral security architecture will either be impossible to construct or if created, likely to collapse if it is not stillborn from the outset.

A realistic assessment of what is possible could help kickstart a process to create a more sustainable basis for a dialling down of regional tensions.

One such assessment would be a realistic evaluation of military options to halt Iran’s nuclear program.

Respected Israeli national security journalist Yossi Melman argues that Israel lacks the military capabilities to destroy Iran’s decentralised program despite claims to the contrary, partly because the US has not sold its bunker-busting bombs.

“The United States is the only country with a military option against Iran. But…(has) eschewed that route,” Mr. Melman noted.

Similarly, Iran and its detractors risk being blinded by their perceptions of the other, which become a self-fulfilling prophecy reinforced by mutual demonization.

Mr. Melman notes that countries like Israel, India, Pakistan, and North Korea determined to develop nuclear weapons did so within five to seven years. Iran revived its nuclear program more than three decades ago.

“How can we explain that 35 years after it launched its efforts, Iran still doesn’t have a bomb and hasn’t even passed the nuclear threshold?” Mr. Melman asked in a recent analysis.