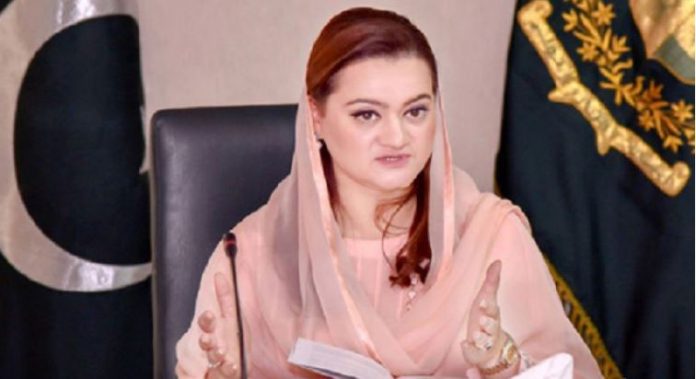 ISLAMABAD, Jul 23 (DNA): Minister for Information and Broadcasting Marriyum Aurangzeb on Saturday said that Hamza Shehbaz was elected Chief Minister of Punjab as a result of the implementation of the Supreme Court verdict.

She said that Supreme Court in its verdict had given the authority of vote only to the party chief.

She said that the President Pakistan Muslim League-Quaid-e-Azam (PML-Q) Chaudhry Shujaat Hussain had issued the same instructions to his party MPAs that Imran Khan had issued.

She advised Imran Khan to accept the decision of the Supreme Court and refrain from threatening.

The SC empowered the speaker to reject the votes in the light of the party head’s instructions and it ordered the removal of the members who violated the decision of the party chief.

In reaction to PTI leader Chaudhry Fawad Hussain’s remarks, she said that 10 votes of (PML-Q members) were rejected during election of the Punjab Chief Minister in the light of the Supreme Court’s decision. The minister said that the constitution and law could not be changed by PTI leader Imran Khan’s threats and use of abusive language.

“If the ruling is in favour of Imran, it is constitutional and if it is in favor of Hamza Shehbaz, it is unconstitutional”, she said while taking a jibe on Imran Khan.

“Your (Imran’s) lies, corruption and hypocrisy are causing irreparable damage to the country”, she added.

The minister further said no development was done in the country during four years of PTI rule, rather it was pushed to the bankruptcy as its resources were looted and plundered.

The minister said during PTI regime the country was deprived of employment opportunities and it suffered economic collapse as cartels of Bushra-Gogi mafia ruled the country for past four years.