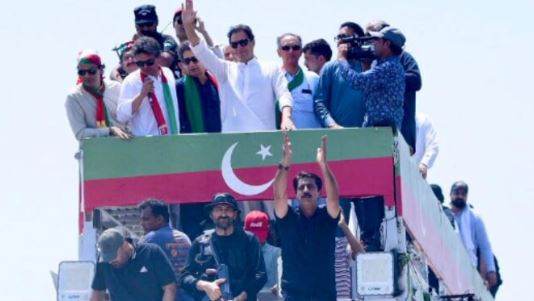 ISLAMABAD: Pakistan Tehreek-e-Insaf Chairman Imran Khan expressed his optimism that the Haqiqi Azadi Movement was destined to succeed as the nation as awaken to liberate the country from the thieves and corrupt rulers, who were getting clean chit in cases.

Speaking at the first women’s convention in the history of the country organized by PTI, Imran Khan said that the fight for Haqiqi Azadi was for the future of next generation and a nation cannot progress without the rule of law.

The PTI Chairman urged the people to fight for Haqiqi Azadi, as slaves can only become good slaves and only free nations ascend.

Imran Khan went on to say that the nation has woken up and the youth is fighting for their rights terming it as the decisive time for Pakistan.

A large number of female students from various universities and educational institutions from the federal capital and adjoining areas participated in the convention.

He said that NAB laws were amended to allow the government to systematically close corruption cases against their leaders and to ensure their return to Pakistan without fear of prosecution for graft cases.

PTI Chairman suggested that the jails should be opened, as what was the fault of the poor, adding that Zardari and Sharif were sitting everywhere in the poor countries. Imran said that that in Pakistan those who committed a smaller crime are in jail; however those who are guilty of major crimes but are powerful are currently comfortable in the power corridors.

He noted that a society which has no justice, people were treated worse than animal, adding that if anyone wanted to see the worst slavery today, then go to Sindh, the way the powerful wolves keep people, they did not keep animals in the West. “When there are no rights, the society of humans also becomes a society of animals that was the reason the Holy Prophet Muhammad (PBUH) first talked about the system of justice,” he said, adding that teachings and principles of the Prophet (PBUH) are guidance for us to follow.

Imran Khan said that if a robber is allowed to sit on a factory, it would be destroyed within no time. “Today, whatever the poor countries are, they all have the same story, as there is no justice, there is the law of jungle and Sharif and Zardari like corrupts are at the helm there who are stealing and plundering national resources and begging from others,” he added.

Imran Khan told the participants that they were not doing politics but Jihad for real freedom and this was very important for future generations.

Islam liberated women by giving them rights, even today despite this we have passed the law but 80% of women do not get their inheritance rights.

Imran Khan said that our Prophet (PBUH) had said that great nations were destroyed before you who could not catch the powerful who stole.

He added that when this movement started, it was clear that if we bring justice to Pakistan, we will be free and this country will become a great country, as the struggle for real freedom is going on.

PTI Chairman went on to say that if they worked hard, the movement of the real freedom would be successful, adding that Shehbaz Sharif trapped the nation in the swamp of debts.

He told the women that this was a decisive time for the country and urged them to go door-to-door and spread the message of freedom and make Pakistan independent from corrupt governance.

He stated that soon he would give the call for his Haqeeqi Azaadi Tehreek’ and called on everyone to participate.