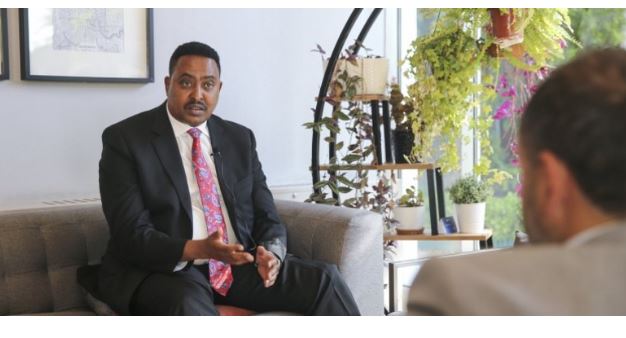 The head of an African trade bloc has praised Türkiye‘s efforts to help Ukraine and Russia reach an agreement to secure grain exports from the war-torn eastern European nation.

“We are expecting eagerly on this issue that the UN and Turkey are working relentlessly on … and we are expecting a positive result,” Workneh Gebeyehu, executive secretary of the Intergovernmental Authority on Development (IGAD).

In the Turkish capital Ankara on Thursday for talks with Foreign Minister Mevlüt Çavuşoğlu, he was referring to a possible agreement between the parties over unblocking Ukrainian grain exports, with Turkish President Recep Tayyip Erdoğan, UN chief Antonio Guterres, and delegations from Kyiv and Moscow attending a ceremony in Istanbul on Friday.

“If they (get a) result with this thing positively, it will be very good news for the world and specifically for my region,” said Gebeyehu.

Tons of Ukrainian grain are stuck in Black Sea ports due to a blockade imposed by Russia during its now five-month-old war, causing global shortages and price hikes. Russia has maintained that Western sanctions are to blame for the food shortages.

Ukraine, known as the world’s breadbasket, is the globe’s fifth-largest wheat exporter, according to the UN Food and Agriculture Organization.

UN officials warned in June of endangered world food security due to Russia’s war on Ukraine, saying it poses the threat of famine, destabilization, and mass migration worldwide as Russia blockades Ukraine’s ports, which normally send grain to the world.

“Our region is always having a deficit of food, or the scarcity of food for the last three years,” he said, pointing to food security problems in the region due to flooding and COVID-19.

“This year in the history of 40 years of the IGAD region, we faced a very severe drought and food insecurity,” he added. “Because of that 50 million of the population of the region is food insecure.”

Hailing Türkiye’s role to ease the conflict between Ukraine and Russia, he said: “In our view, it should be resolved peacefully through negotiation. That is our position, and also that crisis has already had a spillover effect on our region and created already an issue of food insecurity.”

Noting the importance of Türkiye’s efforts on “drought, in food security,” he said that he mentioned these issues to the Turkish foreign minister “and the promise that the Turkish government and people will be with the people of the region, as they were doing it before, and we are very thankful.”

IGAD is an eight-member regional bloc of the Horn of Africa and neighboring countries-Djibouti, Eritrea, Ethiopia, Kenya, Somalia, South Sudan, Sudan, and Uganda. The group focuses on regional cooperation and efforts for peace and security.

The bloc is “working on peace and security,” Gebeyehu said, giving examples of its role as “a broker” in several regions from South Sudan to Somalia and Ethiopia.

“We need Turkey to play a constructive role because I can say that without any contradiction that Turkey has the trust of all our member states,” he said. “So that’s what I mentioned to (his) excellency foreign minister (Çavuşoğlu), and I asked him to play a very constructive role to bring peace to the region.”

“So we agreed on that area. So it is the beginning of a very strong, multilateral relationship between Turkey and IGAD,” he added.