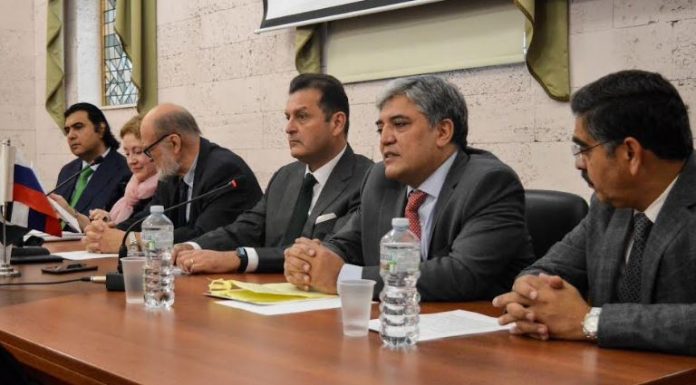 The International Conference on 75th Anniversary of Pakistan was organized by the Institute of Oriental Studies in collaboration with the Embassy of Pakistan in the Russian Federation to highlight and discuss different aspects of place and role of Pakistan in global and regional affairs, cooperation, current progress in the bilateral relations , exploration of cooperation and connectivity, strengthening of Pak-Russia strategic and economic relations.

Chairman Senate Standing Committee on Human Rights Senator Walid Iqal in his keynote address stressed the need of cooperation between Pakistan and Russia. He acknowledged Russian support of  Pakistan membership of SCO and conveyed gratitude for Russian Federation assistance in the wake of unprecedented floods in Pakistan.

He stressed the need of realization of cooperation of agreements including the Pakistan Stream Gas Pipeline project to further boost the relations between the two countries. He mentioned Dr.  Allama Iqbal’s emphasis on Asian renaissance and how it would positively impact the world. He added that an Asian renaissance was inconceivable  without Russia.

Ambassador Shafqat Ali  Khan, while deliberating upon the bilateral relations between the two countries, noted with satisfaction that the trajectory of progress is not only positive but also seamless irrespective of change of Governments. He listed significant achievements of Pakistan in various fields. He highlighted strong political consensus  in the country for the constitutional  democracy and rule of law. He also briefed on various aspects of Pakistan foreign and defense policy and emphasized the importance of settlement of Kashmir issue for peace and security in the region.

Welcoming the Chief Guest and distinguished Senators, Professor Vyacheslav Belokrensitsky, Chairman Center for the Study of Near and Middle Eastern Countries, Institute of Oriental Studies said that the occasion provides a valuable opportunity for the learned participants to throw lights on various aspects of bilateral and regional issues with their recommendations. He appreciated the Embassy of Pakistan for extending its cooperation in this regard.