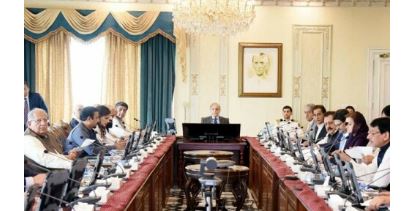 ISLAMABAD, OCT 4 /DNA/ – Prime Minister Shehbaz Sharif has constituted a high-powered committee, comprising federal ministers and heads of intelligence agencies, to oversee the investigation into the leaks of conversations in the Prime Minister’s House (PMO), it emerged on Tuesday.

The embarrassing leaks particularly raised concerns about the security arrangements at the PM House, which is otherwise considered a highly secure place.

According to a notification issued by the Cabinet Division dated September 30, a copy of which is available with Dawn.com, Interior Minister Rana Sanaullah will lead the high-level committee, which comprises Minister of Law and Justice Azam Nazir Tarar, Minister for Climate Change Sherry Rehman, Minister for Communications Asad Mehmood, Minister for IT and Telecommunication Aminul Haque, director-general of Inter-Services Intelligence (ISI), director-general of Intelligence Bureau (IB) and the cabinet’s secretary.

Technical experts from the Pakistan Telecom Authority, Federal Investigation Agency, ISI and National Information Technology Board will also be co-opted members of the probe.

The committee will be responsible for overseeing and reviewing the cyber security breach at the PM Office and ensuring that it covered all aspects of the matter within seven days.

“[They will] review the existing cyber security protocols of the Prime Minister House/Office and suggest immediate measures and action plan to develop foolproof security systems and digital eco-system that insulates the cyberspace of PM Office/House from all kinds of intrusion (in seven days),” the notification said.

The committee, it went on, will revisit existing e-safety and cybersecurity procedures and guidelines, broadly evaluate the existing capability and vulnerabilities of government departments and reassess the risks associated with various electronic gadgets such as tablets, smartphones, WiFi and other cyber devices.

“And suggest measures to develop the resilience of government offices against cyber attacks.”

Furthermore, the prime minister has instructed the committee to suggest recommendations to protect sensitive data of important ministries within 15 days and draft a legal framework for a secure cyber environment of government offices.

The development today comes after audio recordings of conversations between key government figures — including PM Shehbaz, PML-N leader Maryam Nawaz and some members of the federal cabinet — discussing governance matters privately surfaced over the weekend, prompting concerns over the security of the Prime Minister’s Office (PMO).

A recording of PM Shehbaz surfaced on Sep 25 where he could be heard speaking with an unidentified official about the possibility of facilitating the import of Indian machinery for a power project that was a concern of Maryam Nawaz Sharif’s son-in-law, Raheel.

The next day, further recordings surfaced, which were shared on social media by several PTI leaders, concerning Finance Minister Miftah Ismail and the resignations of PTI lawmakers from the National Assembly.

One clip purportedly features a conversation between PML-N Vice President Maryam and the premier about Miftah, wherein a voice thought to belong to the former says he “doesn’t know what he is doing” and wishes for the return of PML-N stalwart Ishaq Dar.

Meanwhile, on Sep 28, an alleged recording of the PTI chairman surfaced. In it, the man believed to be Imran can be heard telling his former principal secretary, Azam Khan, about a cypher that the PTI chief has for long presented as evidence of a “foreign conspiracy” to oust him from the top office.

Later in another audio clip that surfaced on social media on Sep 30, a voice, believed to be Imran’s, was heard saying: “Shah Jee we have to hold a meeting tomorrow […] you and the three of us (Imran, Qureshi and Azam Khan) and the foreign secretary.

The leaks have raised an all-out security concerns in the country. Last week, the National Security Committee decided to probe the audio recordings after PM Shehbaz termed them a “very serious lapse”.

On the other hand, Imran has asked the security agencies to answer who was responsible for the audio leaks.