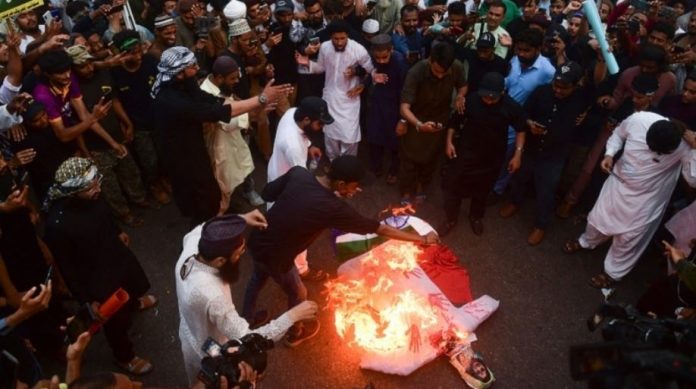 Muslims took to the streets in huge protests around Asia after Friday prayers, sparked by remarks about the Prophet Muhammad (PBUH) by an Indian ruling party official that embroiled the country in a diplomatic storm.

Anger has engulfed the Islamic world since last week, when a spokeswoman for Prime Minister Narendra Modi’s ruling party made a disrespectful comment on the Holy Prophet on a TV debate show.

Around 20 countries have since called in their Indian ambassadors and the party has gone into damage control, suspending the official from its ranks and insisting it respected all religions. Friday saw the biggest street rallies yet in response to the furore, with police estimating more than 100,000 people mobilised across Bangladesh after midday prayers. “We gather here today to protest the insult of our Prophet by Indian government officials,” said Amanullah Aman, a protester in the capital Dhaka.

“We want death penalties for them. Crowds in the city chanted slogans denouncing Modi and warning enemies of the Muslim faith to “be careful”.

In Pakistan, Tehreek-e-Labbaik Pakistan (TLP) held a march in its stronghold of Lahore after Friday prayers.

Around 5,000 supporters of the TLP — a previously banned group — gathered to protest in the city centre calling on the government to take stronger action against India over the comments.“The Prophet of Islam is our red line. Be it India… or anyone else, they should know that defenders of Islam will not remain silent,” said school teacher Irfan Rizvi.

Members of India’s 200 million-strong Muslim minority community staged demonstrations in several cities, with a large crowd gathered on the steps of the 17th-century Jama Masjid mosque in New Delhi.Elsewhere in the capital, social media footage showed students of the prestigious Jamia Millia Islamia university burning an effigy of Nupur Sharma — the Bharatiya Janata Party spokeswoman whose comments set off the furore.

A spontaneous shutdown saw businesses close across Srinagar, the region’s major city, with protesters calling for retribution against “disrespect” to the Prophet.

In Indonesia, the world’s largest Muslim-majority country, about 50 protesters staged a rally in front of the Indian embassy in Jakarta.

“The Indian government must apologise to Muslims and they must take strict action against the politicians who made the remarks,” protest coordinator Ali Hasan told.