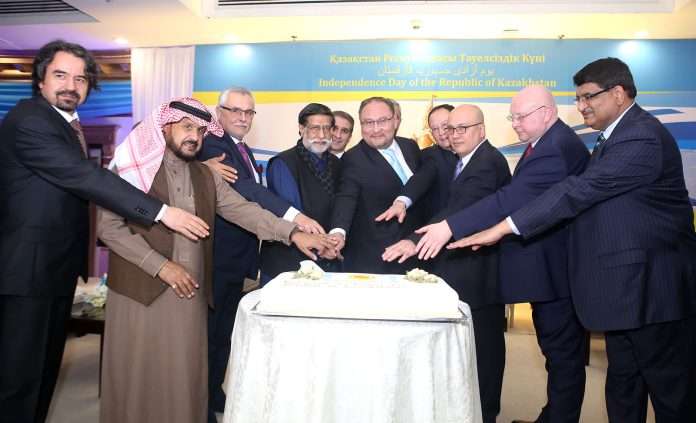 though a lot has been achieved in Pakistan-Kazakhstan relations, there is still plenty of opportunities to expand our mutually beneficial ties, particularly in trade and economic cooperation, cultural, education and tourist exchange.

“I will be trying my best to bring our partnership to the new qualitative level”.

The ambassador made these remarks while speaking on the occasion of Independence Day of Republic of Kazakhstan.

Muhammed Mian Soomro, Federal Minister for Privatization was the chief guest. While a large number of guest hailing from various walks of life attended the reception.

The ambassador further said Kazakhstan highly values good relationship with Pakistan and those greater benefits, which it may bring us in the near future.

He said Kazakhstan was an integral part of Central Asia – a region connected with centuries-old links with South Asia. This is what defines our foreign policy towards brotherly Pakistan. And we are grateful and proud that Pakistan was among the first countries that recognized our Independence.

“Soon after we had established our diplomatic relations, Kazakhstan opened its Embassy here in Islamabad in 1994, to which I became a part as a young attaché. And now I am back after twenty five years as an ambassador – proud and honoured”.

The ambassador said achievements of Kazakhstan were largely inspired by political wisdom and energy of the First President of Kazakhstan, Nursultan Nazarbayev, who also played a vital role in establishing cordial relationship between Kazakhstan and Pakistan incepted from first visit to Islamabad in 1992. (Planted a tree – grew from little tree into strong, solid and beautiful tree – a symbol of how our friendship has develop).

He said this year his country had reached major milestones and seen peaceful power transition.

The founding father, First President of Kazakhstan Yelbasy Nursultan Nazarbayev relinquished his powers after devoting 27 years of service to building a modern Kazakhstan. Just a few days ago, Kazakhstan celebrated the Day of the First President.

While concluding his speech the ambassador added, they strongly believed that long-lasting tradition of friendly Kazakhstan-Pakistan relationship would be also enhanced under current political leadership of both countries as we share same values, which are primarily about respecting human rights, peaceful development, religious and ethnic diversity of their citizens.=DNA