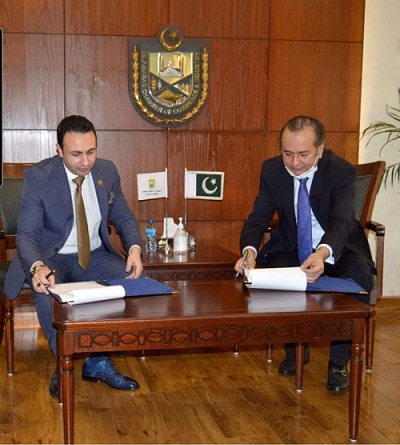 He said that CDA should provide free of cost plot for dispensary and mosque in industrial area. He said CDA should defer the receipt of property tax, reduce its rate and allow its payment in easy instalments. He said CDA should streamline completion certificates and building plans approval regimes to facilitate the business community.

He said CDA in cooperation with ICCI should construct an expo centre in Islamabad. He said that CDA should allocate plots in markets for parking plazas or arrange parking in markets on BOT basis. He said that ICCI has planned to organize a shopping festival and winter festival in Islamabad and CDA should cooperate in making these festivals successful.Speaking at the occasion, Amir Ali Ahmed, Chairman CDA said that the civic body was going to launch a mobile application to address the issues and complaints of the business community and the citizens in 72 hours from the time of registration of complaint.

He said that CDA in consultation with ICCI would allocate land for the establishment of a new industrial estate in Islamabad along the ring road on Rawat-Sihala belt. He said that President ICCI would be invited to CDA Board meetings to get the input of the private sector and recommendation would be sent to the government to make him a member of CDA Board.

He said that CDA has now earmarked over 60 percent of its budget for the development works and many development projects including carpeting of main & street roads, improving sewerage & drainage system and restoring streetlights would be started soon. He said that out of 40,000 total street lights in Islamabad, CDA has made 10 percent streetlights functional while the 90 percent would be made functional in less than two months. He expressed these views while addressing the business community at Islamabad Chamber of Commerce and Industry.Amir Ali Ahmed said that CDA would construct parking plazas in markets on public-private partnership basis for which tender would be floated soon.

He said 235 parks in Islamabad would be revived in 3 months, the abandoned sewerage treatment plant would be made functional and another contractor would be hired for improving sanitation services in the city. He said that complete redoing of IGP road would be started in December while Islamabad Expressway would be made signal free up to Rawat.

He said he would send his planning team to ICCI to discuss in detail the planning and approval regimes of commercial and industrial buildings to facilitate the business community. Ms. Fatma Azim Senior Vice President and Abdul Rehman Khan Vice President ICCI thanked Chairman CDA for visiting ICCI and said that CDA should focus on beautification of markets, address sewerage line and streetlight issues, construct public toilets in markets along with provision of filtration plants for availability of clean drinking water.Mian Akram Farid Chairman Founder Group, Abdul Rauf Alam, Khalid Javed, Ch. Waheed ud Din, Zahid Maqbool, representatives of various markets and a large number of business community were present at the occasion.