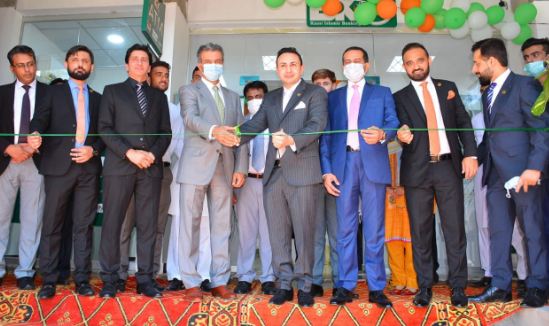 ISLAMABAD, SEPT 25 (DNA) – Sardar Yasir Ilyas Khan, President, Islamabad Chamber of Commerce & Industry (ICCI) has called upon the government to take strong policy measures for further promoting the Islamic Banking products for the private sector that would help in boosting the business activities and the overall economy.

He said that the Pakistani nation has more confidence in the Islamic banking products and expanding the network of Islamic Banking branches across the country would facilitate in expansion & diversification of businesses, purchasing industrial machinery and plants for upgradation and making investment in start-ups leading to creating more employment and speeding up the growth of the overall economy.

He said this while speaking as Chief Guest after inaugurating Raast Islamic Banking Branch of the Bank of Khyber (BoK) at I-10 Markaz, Islamabad.

Sardar Yasir Ilyas Khan congratulated the management of BoK for opening its Islamic Banking Branch in one of the important commercial centres of the federal capital and hoped that it would provide attractive products to the business community for business promotion.

He expressed appreciation for the leadership of BoK to spearhead the continued success of the bank and wished them many more achievements in future.

Speaking at the occasion, Muhammad Ali Gulfraz, Managing Director, Bank of Khyber thanked Sardar Yasir Ilyas Khan for inaugurating Raast Islamic Banking Branch of BoK. He informed that the BoK was established in 1991 through an Act passed by the Provincial Legislative Assembly and was awarded status of a scheduled bank in September 1994.

He said that BoK now enjoys a unique position and stands out amidst other banks operating within Pakistan. The BoK has long been associated with business and commercial circles and has been actively engaged in catering to the financial needs of all sectors. He said that BoK has successfully been involved in extending funded and non-funded facilities to its customers for various business needs.

He said that BoK is now an “A-1” rated commercial bank, operating across the country with a network of 179 branches and is still expanding. He said that BoK has always played a vital role in the development of Khyber Pakhtunkhwa in particular and participated in the economic development of Pakistan in general. The opening of its Raast Islamic Banking Branch in Islamabad is another great achievement towards its journey of growth and expansion.=DNA