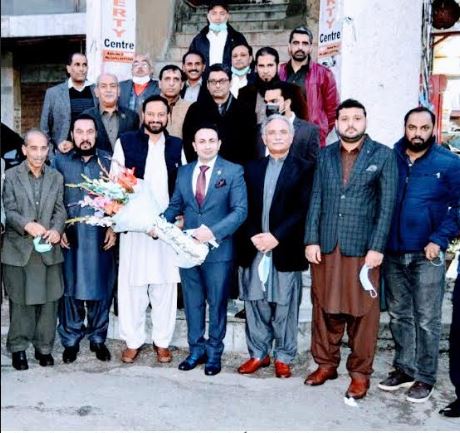 Speaking at the occasion, Sardar Yasir Ilyas Khan expressed good wishes for Shehzad Shabbir Abbasi President and his team on winning the elections and hoped that they would play an active role in resolving the key issues of traders of their market. He said that along with CDA Chairman Amir Ali Ahmed, he had conducted visits to various markets in Islamabad starting from the supermarket to assess the needs for development works in markets.

He said that CDA has now started the development works in markets including carpeting of roads, restoration of streetlights and improving basic infrastructure, which was laudable as it would facilitate the better growth of business activities.

He said that ICCI would try to organize a top class shopping festival in Islamabad in which markets and commercial centres of the federal capital would participate and hoped that it would give a boost to business activities in the region. He assured that ICCI would extend all possible cooperation to the TWA, Super Market in its efforts to solve the problems of the traders.

Shehzad Shabbir Abbasi, President and Saqib Taj Abbasi, Secretary General, Traders Welfare Association Supermarket Islamabad thanked the ICCI delegation and said that with the keen interest and efforts of Sardar Yasir Ilyas Khan, CDA has initiated development work in markets, which was appreciable. He said that the National Assembly has already passed the amended bill of rent control act, which was a long-standing demand of the traders.

He, therefore, stressed that ICCI in collaboration with market associations should intensify efforts to get the said bill passed from the Senate so that traders could fully focus on promoting trade activities with a sense of security and confidence. He assured that TWA Super Market would fully support the ICCI in making the shopping festival successful.=DNA