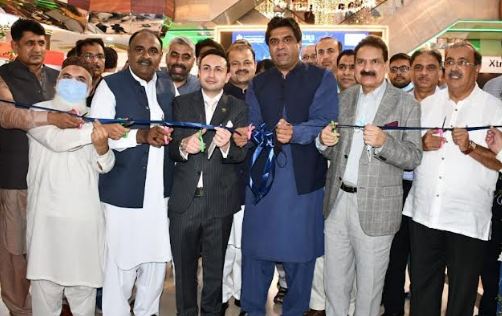 ISLAMABAD, SEPT 24 (DNA) – The Islamabad Chamber of Commerce and Industry (ICCI) has organized one of the largest IT & Tech Expo 21 at the ground floor of Centaurus Mall, Islamabad to highlight IT’s sectors potential for trade and exports. A large number of international and local IT companies participated and displayed their software & hardware products.

The Expo will continue till September 25, 2021 and the participating companies are offering their products to the public at discounted rates. The local universities have also been provided free space in the Expo so that their students can present their business ideas for commercialization and advancement in the IT sector. Mian Akram Farid Chairman Founder, Mian Shaukat Masud, Ch. Nadeem Gujjar, Javed Iqbal, Rana Qaiser Shehzad, Muhammad Ali Mirza, Hameed Abbasi and others were also present.

He further said that the government was ready for all possible cooperation with the private sector to further improve the IT sector. He appreciated the ICCI initiative for organizing IT & Tech Expo as holding such exhibitions regularly was instrumental in promoting trade and exports of the IT sector.

Expressing his views, Sardar Yasir Ilyas Khan, President, Islamabad Chamber of Commerce and Industry, said that it was important to hold exhibitions for better development of business activities, exports and economy. In line with this objective, ICCI had recently held a mega Property Expo and now it has organized a major IT & Tech Expo to highlight the business potential of this important sector of the economy.

He said that Pakistan is a country of young population and there are innumerable opportunities for youth in the IT sector for a prosperous career. He said that if the government cooperates and pays special attention to its development, the IT sector has the potential to export up to US$10 billion annually.

He further said that moving towards the digital economy is extremely important for Pakistan to grow as a strong country of the region and urged that the government should further reduce the internet rates along with expanding the internet network in cities and villages that would lead to better growth of the IT sector.

Sardar Yasir Ilyas Khan said that the global IT market is around USD 5 trillion but Pakistan’s IT exports are only up to USD 2 billion, which shows that Pakistan has immense potential to further boost its IT exports. He said that software companies have been given space in SEZs but hardware companies have not been provided this facility, so he demanded that the government should provide a level playing field to software and hardware companies for better growth. It will bring more investment in the IT sector and create plenty of new jobs for youth, he observed.