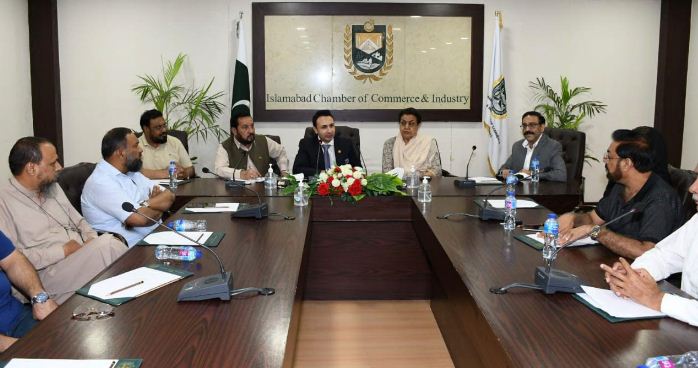 ISLAMABAD, JUN 23 – The business community in a meeting at Islamabad Chamber of Commerce & Industry (ICCI) has expressed great concerns over the 400 percent hike in tax rates on the turnover of flour mills and called upon the government to immediately withdraw this unprecedented hike to save the common man from a new wave of food inflation and flour shortage.

Addressing the meeting, Sardar Yasir Ilyas Khan, President, Islamabad Chamber of Commerce & Industry said that wheat flour was the staple food for majority of population in Pakistan and an essential part of their daily diet, but exorbitant in the income tax rate on the turnover of flour mills from 0.25 percent to 1.25 percent in one go would make significant increase in the price of flour and push it out of the reach of common man making his life more miserable. He feared the unprecedented increase in tax on flour mills would make the flour more expensive for the common man consuming a larger share of his income due to which it would become very difficult for him to meet the basic needs of his life.

Sardar Yasir Ilyas Khan said that the Covid-19 pandemic has already rendered many workers jobless, reducing income of many families and in these circumstances raising tax rates on flour sector would create multiple problems, especially for the low income segments of the society. He demanded that the government should immediately withdraw the unjustified hike in tax rates on flour mills, otherwise, the people would face food insecurity leading to unpredicted consequences for them. He also slammed the decision of imposing 17 percent sales tax on bran through the new budget, which was abolished four years ago and added that it would also give rise to inflation resulting in restlessness among the masses.

Fatma Azim Senior Vice President and Abdul Rehman Khan Vice President ICCI said that flour was a basic need of the majority of people in Pakistan and increasing taxes on flour millers would naturally make flour costlier that would put extra burden on the low income people making it more difficult for them to bring food on the table for their family members. Therefore, they urged that the government should reconsider this unwise decision to save the people from the harmful consequences of this increase. They further said that flour millers have also threatened to go on strike against the 17 percent GST on choker and 400 percent hike in income tax on their turnover, therefore, they urged that the government should immediately withdraw 17 percent GST and restore tax to previous level of 0.25 percent to save the country from exorbitant food inflation and social unrest.