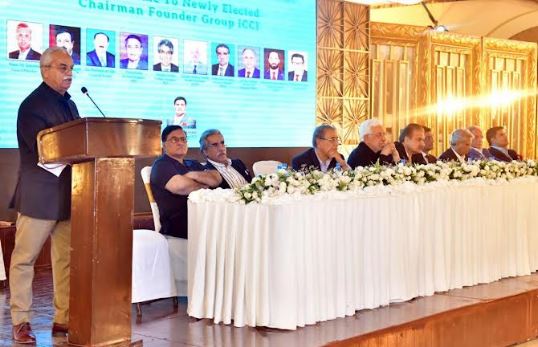 ISLAMABAD: The newly elected chairman of Islamabad Chamber of Commerce and Industry Founder Group Khalid Iqbal Malik has said that the Islamabad Chamber is taking all possible steps for the welfare of traders, promoting the interests of the business community more effectively. The Founder Group will accompany all the members of the Chamber. He expressed these views at a Dinner  in honor of himself and the outgoing Chairman Mian Akram Farid, former Vice President of the Islamabad Chamber of Commerce  Ahsan Zafar Bakhtawari .  while addressing He further said that all the issues faced by the traders regarding CDA would be resolved on priority basis.Mian Akram Farid, the outgoing chairman of Founder Group, said that he would use all his resources to solve the problems of the business community.

Shakeel Munir, President Islamabad Chamber of Commerce and Industry said in his address that most of the problems of our traders are related to CDA. I have also had a meeting with the Chairman CDA in this regard. He assured that he would also work with the market associations to facilitate them in promoting trade activities.

Zubair Ahmad Malik said that sitting together and discussing issues helps in understanding the Business issues. He further said that we are also preparing a team of young entrepreneurs who will lead us in future. Khalid Javed said that it is the responsibility of group chairman to activate the  group and strengthen it for the elections, if our thinking is positive then the group will also develop, Tariq Sadiq said that it is  commendable for the representative body of traders to work for the welfare of their community and solve their problems.Zafar Bakhtawari said that Khalid Iqbal Malik is an excellent choice who has a vision to solve the problems of traders, Mian Akram Farid’s services are unforgettable, Shakeel Munir is trying to solve the problems of traders, Khalid Javed  played vital role in chamber building .  Zubair Ahmad Malik is a binding force for traders, Ijaz Abbasi said. Will play a role in strengthening the Founder Group.In his address, Ahsan Zafar Bakhtawari reiterated to make the group active and strong under the guidance of all senior members.