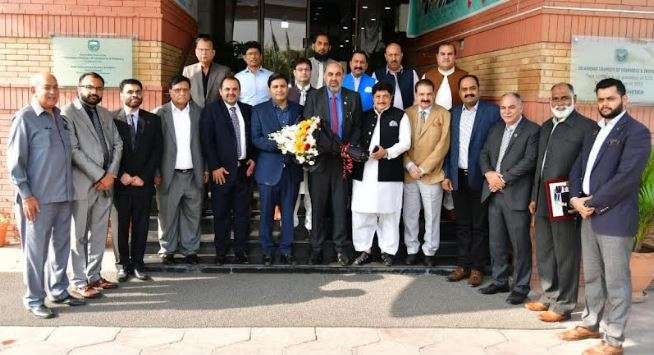 Islamabad, OCT 16 /DNA/ – Ahsan Zafar Bakhtawari, President, Islamabad Chamber of Commerce & Industry (ICCI) stressed that the government should allocate land to small chambers of commerce and industry in every district, which will facilitate the growth of new businesses, enhance exports, generate jobs and help revive the economy. He said this will addressing a delegation of Rawalpindi Chamber of Small Traders and Small Industries that visited ICCI led by Malik Shahid Ghafoor Parachi Group Leader, Nadeem Sheikh Chairman and Tariq Khan Jadoon President.

Ahsan Zafar Bakhtawari said that SME sector is the backbone of the economy as it is making 40% contribution to the country’s GDP, 25% in overall exports and provides jobs to 78% of non-agriculture sector, but credit to SMEs is just around 6 percent of the total private sector credit in Pakistan, which is a major barrier for their growth. He said that high transaction costs and tough collateral requirements are the key hurdles which impede bank lending to SMEs and stressed that the government should address these issues to increase lending to SMEs to at least 20% of the total private sector credit so that small businesses can play a more effective role in the economic development of the country. He assured that ICCI would cooperate in resolving the key issues of small traders and small industries to facilitate their better growth.

Malik Shahid Ghafoor Parachi Group Leader, Nadeem Sheikh Chairman and Tariq Khan Jadoon President, Rawalpindi Chamber of Small Traders and Small Industry said that the small businesses had suffered great losses due to Covid-19 pandemic and are now reviving after a long time. However, they are once again seeing containers on the main entry points of the twin cities, which are creating great concerns in them as they cannot afford any further closure of businesses. They stressed that the government and all political parties should settle their issues through dialogue and avoid any move that may disrupt businesses and create problems for the citizens. They said that chambers of small traders and small industries needed the support of the government for allocation of land to set up their own offices so that they could play a more effective role in the economy. They said that they would work with ICCI for facilitating the growth of SMEs in the twin cities.

Naeem Ashraf Senior Vice President, Muhammad Mehfooz Vice President, Rawalpindi Chamber of Small Traders & Small Industries, Zafar Bakhtawari, Mian Akram Farid, Khalid Chaudhry and others also spoke at the occasion and stressed that the government should take all possible measures to save businesses of the twin cities from closure due to any long march or protests as it would be detrimental for the economy.