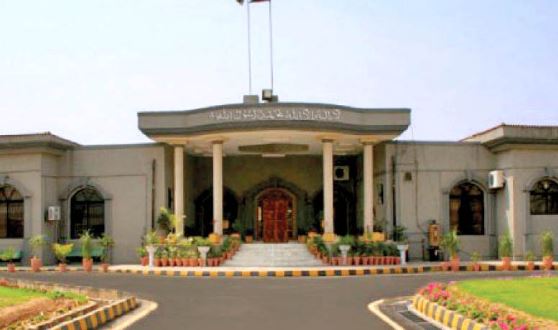 ISLAMABAD, AUG 16: The Islamabad High Court on Tuesday decided to fix the prohibited funding case before a larger bench. The hearing is set to take place on August 18.In his remarks during today’s hearing, acting IHC chief justice Aamer Farooq said: “Let us constitute a larger bench to hear this case.”

“The larger bench will hear the case the day after tomorrow,” he said.Barristers Anwar Mansoor and Faisal Chaudhary appeared on behalf of the PTI, which was found by the Election Commission of Pakistan to have received prohibited funding. A notice was issued to the party asking it to explain why the funds should not be confiscated.

“We have challenged the Election Commission’s fact-finding report,” Mansoor said.

He appealed to the court to not take any action as far as the show cause notice issued to the party is concerned.At this, Justice Farooq said that this matter, too, will be taken up by the larger bench.

The court then adjourned the hearing, before issuing directives for a larger bench to hear the case on August 18.In a unanimous ruling on August 2, a three-member bench of the election commission said it has found that the PTI received prohibited funding.

The case was earlier referred to as the “foreign funding” case, but later the election commission accepted the PTI’s plea to refer to it as the “prohibited funding” case.As per the 68-page order, the commission stated that the Imran Khan-led PTI did indeed receive funding from foreign companies and individuals, which it hid.

The ECP verdict states that the PTI received funds from 34 individuals and 351 businesses, including companies.