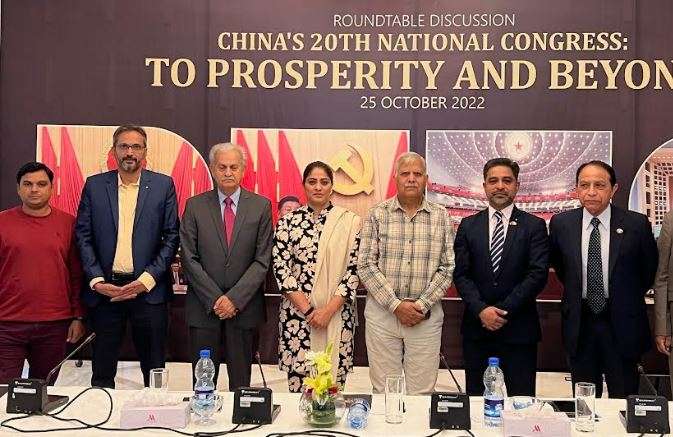 ISLAMABAD, OCT 25 /DNA/ – Islamabad Institute of Conflict Resolution (IICR) organized round table on “China’s 20th National Congress: To Prosperity and Beyond”. The roundtable was in continuation of IICR’s Round table discussion based on Chinese National Congress.

Speaking to the audience from China, Prof. Zhou Rong said that western social setup is deteriorating with ever increasing wealth gap in the society. Whereas the Chinese model of development based on socialist system encourages cooperation, mutual learning and peaceful development.

Furthermore, Prof. Rong added that Chinese development model is indigestible for the west due to which it is engaged in massive propaganda against China and its leadership. Adding further he said that west is leading an organized campaign against China in order to hinder the progress it is making.

The next speaker on the panel was Prof. Engr. Zameer Ahmed Awan who highlighted the effectiveness of the CPC for Chinese development. Prof. Ahmed said that China is contributing in world economy with its shared progress ideology.

It silently worked on organizing its internal dynamics and then aspire to lead the world. Adding further he said that world is acknowledging the Chinese progress whereas west feel threatened by it. The key of Chinese socio-economic miracle lies in the trust of people towards its leadership. People trust president Xi and supports his ideology.

Speaking next, Dr. Tahir Mumtaz described the Chinese socialist model which is the backbone of Chinese progress and its global footprint. Dr. Mumtaz said that China is pursuing socialist modernization through integrating Chinese characteristics to the country.

Adding further he said that China is comprehensively working on human development at home and abroad and there is a lesson for countries in it. Discussing lessons for Pakistan Dr. Mumtaz said that Pakistan should learn and implement Chinese development model and Pakistan needs to move ahead from subsidiary issues it is facing.

The last speaker on the panel was Mr. Shakeel Ramay who talked about Challenges to China and CPC. Speaking to the audience Mr. Ramay said that the biggest challenge to China is to counter Xi-Phobia of the west. West is propagating an organized campaign against President Xi to paint him in every negative way possible. Furthermore, he said that China would also have to counter propaganda against China as a whole. While talking about CPC, Mr. Ramay said that there is a need of reforms in CPC in coming years because China has to play major and complicated role in coming years. It already is changing a lot with the inclusion of more professionals in the central committee and CPC.

The session was ended with concluding remarks by Dr. Tahir Mumtaz Awan.