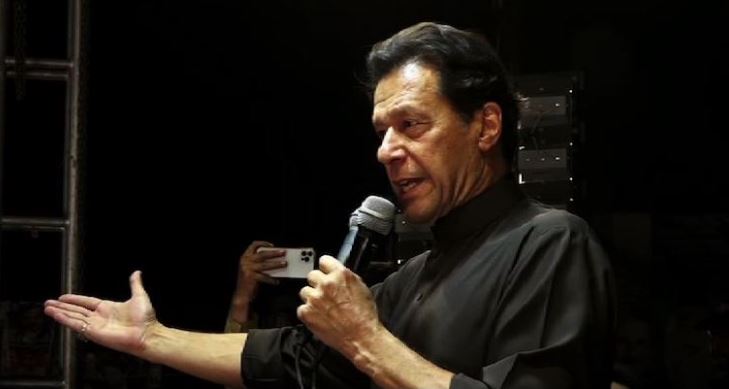 Faisalabad, MAY 15: The Pakistan Tehreek-e-Insaf (PTI) chief Imran Khan has addressed a rally at the Dhobi Ghat ground in Faisalabad and said that the “government of theives” was imposed on Pakistan not only due to a ‘foreign consipracy’ but also due to internal (androni) Mir Jaffars.

Imran Khan began by saying that when took to power, the industries in Faisalabad were shut and people were jobless, and before he left investors told him that laborers were hard to find.

Khan said that due to his policies the factory owners ‘gave record exports’ for Pakistan.

He then asked the participants of the rally if they were ready for marching on Islamabad.

Imran Khan said that under his government exports and tax collections were growing, farmers were earning record income, and the industry was growing, a conspiracy was hatched in the United States and executed with the help of local ‘Mir Jaffar.’

Khan then asked if ‘they’ were able to stabilize and smoothly run the country.

Imran Khan said that poultry prices had gone up because Hamza Shahbaz was in the poultry business.

The PTI chief said that if the media person go out to people they would hear only two words, “traitor” and “thief”.

Imran Khan then launched a diatribe against the PML-N leaders.

Imran Khan uttered a couplet by Iqbal and said that death is better than slavery.

The former prime minister claimed that those plotting against him left the worst financial conditions in the country but he survived and then he also survived the Covid-19 pandemic.

Finally, when the economy was being revived, they overthrew his government but they were surprised to see that people had come out in the streets to protest his ouster, Khan said.

Imran Khan claimed that when ‘they’ saw public support for him, they plotted to kill him and he had recorded a video and named each of them.

The PTI chief had also spoken about the same video at a rally in Sialkot a day before.

Imran Khan then repeated his claims about Donald Lu issuing a threat for the removal of the Khan government.

“Not only due to external conspiracy, but also due to internal Mir Jaffars and Mir Sadiqs the government of thieves was imposed on us,” he said.

He said that he can never accept the ‘imported government’ and that imposing us on ‘us’ was an insult to 220 million people.

The PTI chief claimed that Prime Minister Shehbaz Sharif had removed all the FIA officers who had prepared cases against him and Dr Rizwan — who died– and Noman Asghar had heart attacks.

The Supreme Court should investigate how Dr Rizwan and Asghar had heart attacks, he said and added that there was a poison that could induce heart attack if given with food.

Imran Khan then criticized the judiciary and said that he had recorded the video about his possible murder because he knew that Pakistan’s justice system would not ensure justice. “You will get me justice,” he told the crowd.

He said that if something happens to him people should bring each of the persons he had named to justice. “By this, in the history of Pakistan the powerful come under the law,” he said.

He asked people to promise him that they will get him justice and “will not accept slavery.” You will also not vote for any political party whose leaders have their money stashed abroad, he said.

Imran Khan said that the current government was leading the country to destruction as the rupee value was falling and inflation was rising. And now they will ask the United States to get them the money by saying that if they were not helped Imran Khan would return to power, he said.

The Americans would not help them until they tightened the noose around their neck, he said, and claimed that the US would ask Pakistan make amends with India at the expense of Kashmir and not buy cheaper oil from Russia.

Imran Khan then praised India for being free in its decisions.

He said that this was the reason that he was asking the people to come out and march on Islamabad.

Imran Khan said that the Pakistani nation could do anything, and it could pool money to repay the debt.

The former prime minister spoke about his efforts against Islamophobia.

He said that he would give the date for the long march later this month and the PTI would ask for the date of a fresh election. This nation would not be at ease until the elections happen, he said.

Imran praised the people of Faisalabad and then said that most lotas were also from Faisalabad. “If any lota wins from the Faisalabad, I would not come to Faisalabad,” he said and ended his speech.

Khan arrived in the city in a private plane that landed at around 6pm.

Other leaders, including Ali Mohammad Khan,  started the event before sunset.

Faisalabad is a traditional stronghold of PML-N and the interior minister, Rana Sanaullah, hails from this city.