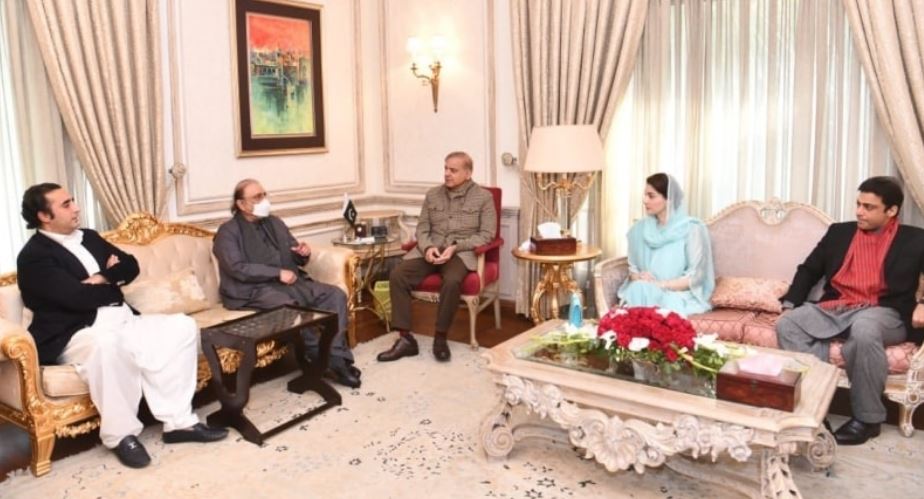 PPP and PML-N leaders on Saturday said both parties were considering all legal, constitutional and parliamentary options to oust the PTI government, adding that Prime Minister Imran Khan had to go.

The opposition leaders were talking outside PML-N President Shehbaz Sharif’s Model Town residence where he had invited PPP Chairman Bilawal Bhutto-Zardari and co-chairman Asif Ali Zardari to a luncheon meeting. Shehbaz said the two parties had come to an agreement that “we will need to use all constitutional, legal and political options” to oust the incumbent government and fix the woes afflicting the country.

Meanwhile, Bilawal said the only valid parliamentary, legal and democratic mechanisms to oust the government were a no-confidence motion and protests. “We have to cast out Imran if we want to save Pakistan,” he said.

Elaborating on the details of their meeting, Shehbaz said it was discussed how and what kind of coordination could be achieved between the PPP and Pakistan Democratic Movement’s (PDM) announced long marches. He added the matter would be taken to PML-N supremo Nawaz Sharif and the PDM and “hopefully a positive outcome will come.”

On the no-confidence motion, he said the PPP was always clear about it but the PML-N had a difference of opinion about it. However, he said that now there was consensus “to a large extent” in the PML-N and the party’s central executive committee would decide it in a meeting in a few days after which the matter would be taken to the PDM’s platform.

“We will make an announcement in a few days after consultation with all PDM parties,” he said.

Questioned on the PPP participating in the PDM’s long march, Bilawal said his party had welcomed the announcement but did not provide an answer.

“The more our working relationship increases, the better impact it will have,” he said.

Shehbaz was also asked about the PDM’s formation and subsequent split to which he said that “broken hearts can reunite.”

PML-N Vice President Maryam Nawaz added that differences and clashes persisted between political parties but “what unites us are the expectations and difficulties of the people.”

Bilawal thanked Shehbaz for hosting the luncheon and heaped praise on the PML-N president for performing his responsibilities as the opposition leader in the National Assembly.

The two leaders also railed against the government for the current economic issues plaguing the country and took note of the recent rise in terrorism. Shehbaz criticised the government for its performance in tackling terrorism and said the National Action Plan had been “placed in a cold storage”.

The leaders also criticised the government for its handling of the Kashmir issue, with Bilawal saying the government had failed to achieve a consensus on it and Afghanistan.