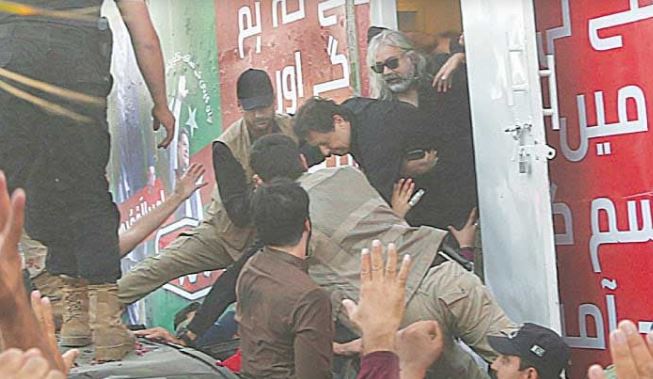 LAHORE: A meeting of the Pakistan Tehreek-e-Insaf (PTI) presided over by former prime minister Imran Khan on Wednesday demanded that the assemblies should be dissolved for early elections to pave the way for immediate elections in all four provinces.

During the meeting, matters pertaining to country’s overall political situation, next phase of Haqiqi Azadi March and other important issues came under discussion.

During the meeting, Punjab Home Advisor Umar Sarfraz Cheema presented the preliminary forensic report regarding the Wazirabad attack to the party leadership.

Speaking to the media after the meeting, Umer Sarfraz Cheema said that the forensic report of the incident revealed that there were more than one attacker, while an attempt to create religious narrative against the former PM has completely failed.

On the occasion, PTI secretary information Farrukh Habib said that the second phase of the long march was discussed in a more than two-hour meeting and termed the attack on party chairman an attack on 22 crore people. He said Interior Minister Rana Sanaullah should be ashamed of his statements, adding that if any officer tries to covertly pressurize the investigation of this incident, will also be exposed, while the time of governor rule in the province is over, now only people s will rule.

On Tuesday, Imran Khan in a series of Tweets said that for the future of Pakistan, the doors of PTI are open to all democratic loving forces to join our struggle for Justice.

The former prime minister wrote that his lawyers will give his position on the issue of the farcical FIR. Imran Khan said, “All my life I dreamt of seeing my country as a prospering welfare state & my struggle throughout has been to make this dream a reality for my nation.”

The PTI chairman also wrote, “Today the nation has awakened, understood & risen in support of my message of justice, freedom & national sovereignty. When we are so close to our goal no fear or threat of death can stop my struggle.”

“Our peaceful protests & dialogue are only for Pakistan s Haqeeqi Azadi.”

“For the future of Pakistan the doors of PTI are open to all democratic loving forces to join our struggle for Justice, rule of law & freedom from foreign subservience – our goal of Haqeeqi Azadi,” he added.

On the other hand, talking to journalists at Zaman Park, the former premier had announced to challenge the First Information Report (FIR) registered by the Wazirabad police assassination bid.

Imran Khan said he knew that he would be shot, and in this regard, a video had been recorded in which he mentioned the names of the people who were behind the attack, adding that a plot was made to kill him in the same way that Punjab Governor Salman Taseer was assassinated by using extremism.

Imran Khan went on to say that accused Naveed’s statement was based on lies adding that Tehreek-e-Labbaik Pakistan (TLP) chief Saad Rizivi has also denied any contact with accused Naveed. “I have no issue with the army, we have only differences over the accountability process,” Imran added.

In response to another question, he said that a coalition government should never be formed, otherwise there will always be blackmail. “f there is a two-thirds majority, the prime minister is strong and can perform better,” said Imran Khan.

Previously, a case of attack Imran Khan during the long march has been registered in Wazirabad city police station.

According to details, the FIR has been registered by sub-inspector Aamir Shahzad on Monday night. The case of firing on former Prime Minister Imran Khan was registered under the provisions of murder, attempted murder and anti-terrorism, while only Naveed, the man who was arrested on the spot, has been named as an accused in the case.

The FIR stated that Imran Khan was coming from Allah wala chowk to Wazirabad on a container and around 4 pm the suspect Naveed opened fire with a pistol. A PTI supporter named Muazzam who was involved in the march, died of gunshot wounds, while chairman PTI was injured on the container. The FIR also mentioned 11 known and some unknown injured.

It further stated that a PTI worker tried to catch the accused Naveed, and so he could not fire any further due to being held by the worker. After the tragic incident, Imran Khan left for Lahore for proper treatment after receiving medical aid.

On the other hand, the Long March attack took place in Wazirabad, which is a part of Gujarat division. The Chief Minister Punjab Chaudhry Pervaiz Elahi had issued a notification to make Wazirabad a district and add it to Gujarat Division.

According to the FIR registered by the police, the incident of firing on Imran Khan and other leaders during the long march took place in Gujranwala. In this regard the sources said that, the investigation may be affected due to the change of district, however, the police termed it as a clerical error and said that it will be rectified.