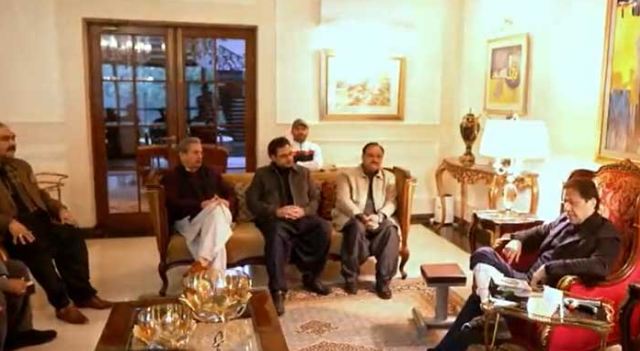 In the wake of the intense law and order situation, Pakistan Tehreek-e-Insaf Chairman Imran Khan Monday yet again blamed the Pakistan Democratic Movement-led government for pushing the country towards “terror incidents”.

“The imposed, corrupt and incompetent rulers are pushing the nation towards [terror] incidents,” the deposed prime minister said while speaking at a consultative meeting which was also attended by the party’s senior leadership as well as Pakistan Muslim League-Quaid’s (PML-Q) leader Moonis Elahi.

It was decided during the huddle that all members of the Punjab Assembly from both parties will participate in the joint parliamentary party meeting on January 2 in which important decisions regarding Punjab will be made, including consultations on seat adjustments and Chief Minister Chaudhry Parvez Elahi’s vote of confidence, sources told.

In the consultative huddle with Imran Khan, PTI’s parliamentarians from the National Assembly also deliberated over the strategy to have their resignations approved by Speaker Raja Parvaiz Ashraf.

The MNAs condemned the speaker’s departure for a foreign visit after the PTI announced confirmation of their resignation. The party’s statement declared the speaker’s biased role and collusion with the government as an insult to the parliament.

The PTI chief’s comments on the state of terrorism in the country came at a time when the country is yet again witnessing a spate of terror attacks, particularly in the federal capital, Khyber Pakhtunkhwa and Balochistan.

The two provinces have been under the radar of terror outfits. In KP, the state of law and order has remained questionable for the last several weeks with the most recent hostage situation unfolding in Bannu’s Counter-Terrorism Department (CTD).

While Balochistan witnessed a series of indiscriminate, cross-border attacks and successive bombings encountered a day earlier in which five soldiers were martyred and several others injured in different cities.

The former premier said that his party is watching the situation closely. “[We] will strongly resist the efforts to expose the nation towards a major disaster,” he said.

Calling out the incumbent government, the ousted PM asked them to go off their ways of benefiting from the National Reconciliation Ordinance (NRO) and demanded the announcement of snap polls.

“Only a government with a public mandate will be able to manage the economy,” he said, underlining the serious economic state of the country as indicated by economists.

“I had forewarned about the consequences of the conspiracy imposed on foreign signals. After the economy’s destruction, the nation is asking that on whose behest is internal chaos being fuelled,” the former prime minister said.