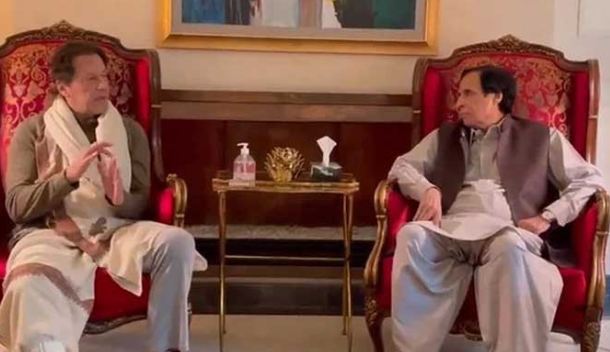 PTI Chairman Imran Khan has tasked the party’s senior leaders to ensure that the provincial chief executive takes a vote of confidence before January 11, but CM Elahi has ruled it out, saying that Punjab Governor Baligh-ur-Rehman’s order for the trust vote is “illegal”.

PTI Senior Vice-President Fawad Chaudhry has said that the party wants the chief minister to take the trust vote before January 11 as the Lahore High Court (LHC) will resume hearing Elahi’s petition against his dismissal as the chief minister on the day — and the coalition plans on showing the court that their CM has the house’s confidence.

But after Elahi’s reluctance to take the vote, sources told Friday that the PTI chief has ordered party leaders that they should ensure the voting takes place and if anyone creates hurdles in the dissolution of the Punjab Assembly, then PTI lawmakers would resign from the house.

The warning from Imran comes as CM Elahi, who had earlier said that he would back the PTI chief’s decisions, is now seeking to stay in office for a longer period than the former prime minister’s plans.

Punjab Assembly Speaker Sibtain Khan has summoned the session for the house on January 9, which was earlier scheduled to take place on January 11.

Although the LHC had restricted the chief minister from dissolving the assembly, the Punjab governor said that if CM Elahi takes the vote of confidence, then it is his prerogative to dissolve the legislative.

Problems have also seemingly arisen for the chief minister after independent lawmaker Syeda Zahra Naqvi said she is an ally of the PTI and not Elahi, with three members of the PTI also set to rebel against the party’s decision to back the PML-Q leader.

Meanwhile, commenting on the political atmosphere in the province, CM Elahi claimed that he says whatever he wants to the PTI chief and he doesn’t mind it.

“Imran Khan doesn’t mind what I say because it later turns out to be correct,” the Punjab chief minister said while addressing a convocation at the University of Punjab.

He added that there was nothing short in the decisions that Khan had taken. “Imran Khan is a leader who isn’t afraid or bends or gets sold. He is a true, upright man. But if there’s anything wrong, then I always express it in front of him,” Elahi added.

The CM further said that the Pakistan Muslim League-Nawaz, on the other hand, began the propaganda against him ridiculing his source of funding.

“The PML-N takes dollars abroad from here, while Ishaq Dar brings it back. The federal government has unleashed a storm of inflation which refuses to stop,” the provincial chief executive said.