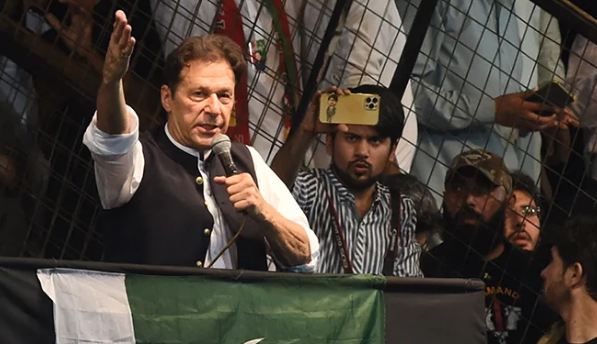 Reiterating his insistence on early elections and hinting at the establishment’s role in the process, former prime minister and Pakistan Tehreek-e-Insaf (PTI) Chairman Imran Khan Wednesday said rather than the incumbent government, it is necessary for those “backing it” to get convinced for the polls to be held soon.

Khan, who was removed from premiership through a vote of no-confidence in the National Assembly in April this year, said that he isn’t foreseeing polls to be conducted soon and made claims of a technocrat government under consideration.

“I don’t see elections happening now. There is hearsay about a technocrat government being brought forward,” the PTI chief claimed while speaking with senior journalists in Lahore.

For the past several months, Khan has been demanding snap polls. His stance intensified after his party’s “Haqeeqi Azadi” march came to an end last month and he announced that Punjab and Khyber Pakhtunkhwa assemblies would be dissolved.

However, PTI’s members of the National and provincial assemblies have yet to process their resignations.

Meanwhile, Khan expects the establishment’s role in conducting general elections but also claims he is not in contact with them.

“There is no contact with the establishment at this time,” the ousted premier added.

He added, “The mandate of the largest party in East Pakistan was not accepted,” Khan said, warning of dire consequences if his party’s mandate is messed with.

Circling back to his stance on the former chief of army staff General (retd) Qamar Javed Bajwa and his policies impacting the country’s economy, the PTI chairman said that the ex-COAS did “great injustice” to Pakistan.

“Gen Bajwa did great injustice to this country, we are standing close to default,” he said, underlining how Pakistan’s threat to default has increased to 90% which was 5% during his government.

Khan added that while his government’s relations with the ex-army chief were “good”, the former COAS’ stance on corruption by politicians is something he isn’t happy about.

“According to Gen Bajwa, the corruption of politicians was meaningless. By amending [National Accountability Bureau] NAB rules, corruption cases worth Rs1,100 billion were dismissed,” Khan claimed.

He reiterated that the interests of Pakistan Muslim League-Nawaz and the PPP are abroad.

“If the interests of both families are not in Pakistan, then how can we attempt the charter of the economy with them,” Khan said, highlighting that the country is under the rule of the “qabza” (occupying) group where law of the jungle exists.

He added that Pakistan’s problems could not be resolved without the rule of law’s establishment.