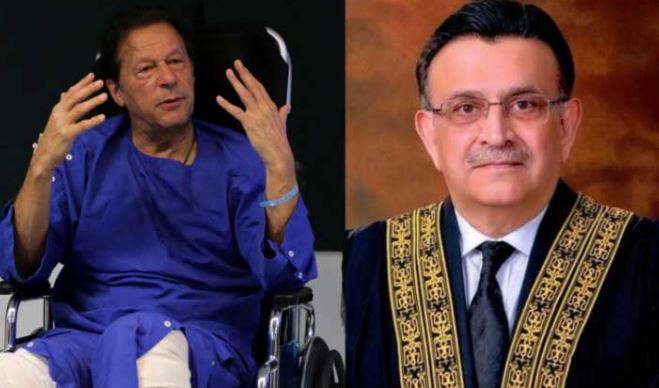 Taking to Twitter, the former premier penned that “Pakistan was created on Islamic moral values of human dignity, honour of the family, & inviolability of chadar & chardawari.”

“What has happened to Azam Swati at the hands of the state has been a blatant violation of all these values – from being stripped naked to custodial torture,” Imran Khan added.

Imran Khan went on to say that it was shocking and condemnable to violate the privacy of Azam Swati and his wife through video.

While urging the CJP, the PTI chairman said “No human being should have to suffer this. I call on the CJP to take suo moto notice of this.”

Mr Khan added that “I want to apologise on behalf of Pakistan to Mrs Swati, a very private, non public, tahajut guzaar lady for the pain, anguish and sense of humiliation she is having to suffer.”

Earlier, while holding a press conference in Lahore, Senator Azam Swati burst into tears before the media on Saturday, saying that his wife had received a video featuring him and her an unknown person, about which he could not share further details because “the “daughters of my country are listening.”

He added that his wife called him from Islamabad at around 9pm last night. She kept on shouting and crying, he said, adding that he then had to ask his daughter to speak to his wife and inquire about the matter.

On her insistence, he continued, and his wife revealed that someone had sent her a video of him from an unknown number. “Because the daughters and granddaughters of my country are listening, I cannot say any further.”

The senator went on to say that his daughter, while crying, revealed to him that the video featured his wife as well.