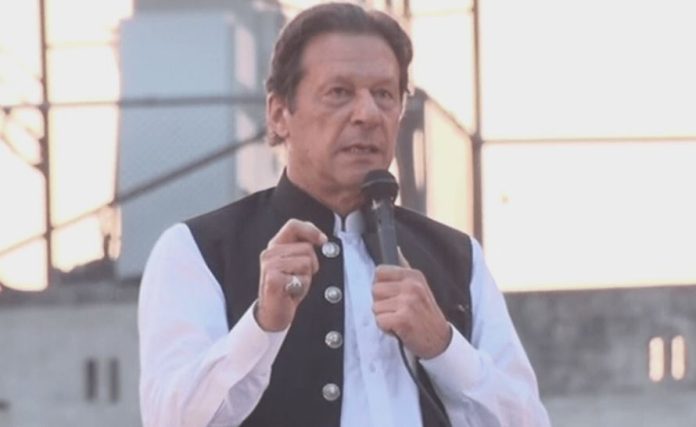 ISLAMABAD, SEP 21: Former prime minister PTI Chairman Imran Khan on Wednesday said that PTI’s movement for “Haqeeqi Azaadi” (actual freedom) will begin on Saturday (September 24) as he called on supporters to get ready for his call.

Since his ouster from the top office, Imran has consistently demanded that a date for “fair and free” snap elections be provided, otherwise, he would take to the streets against the incumbent government.

The PTI had attempted a long march to Islamabad in May which was clamped down upon and suppressed by the police. Last week, Imran renewed his demand for snap polls as he warned that the PTI’s patience was wearing thin.

He had hoped that the election announcement would be made before he unveiled plans for the final march on Islamabad.

“I will give a call and we will get our country liberated in real terms,” he said today in an address at a lawyer’s convention in Lahore.

Imran’s announcement comes after the federal government beefed up security arrangements in Red Zone areas of Islamabad, saying that “some people were headed towards Islamabad to have their political demands accepted”.

In his address today, the PTI chief again said that those “issuing threats from unknown numbers” should be threatened back — something he had first mentioned in his speech in Chakwal on Monday.

He criticised the incumbent government for its economic policies, saying the rupee had greatly depreciated against the dollar and caused inflation and unemployment to soar.

He alleged that while the poor people were suffering, the wealth of those in the government was increasing. Imran also bemoaned the rule of law and unequal application of justice in the country compared to western countries.

He said that in western countries, no one received threats from unknown numbers and criticised the recent clamp down on some journalists who were thought to be pro-PTI.

“The law enforcement agencies whose job it is to implement the rule of law are the ones breaking the law and committing injustice against the people.”

He added that the absence of rule of law led to investments drying up and boosted the corruption.

Meanwhile, earlier in the day, Interior Minister Rana Sanaullah has ruled out the possibility of talks with Imran — whom he termed “insane”. The minister said a protest was a democratic right and it could be held at F-9 Park.

He warned of dealing with protesters with an iron hand if they tried to move towards the D-Chowk.