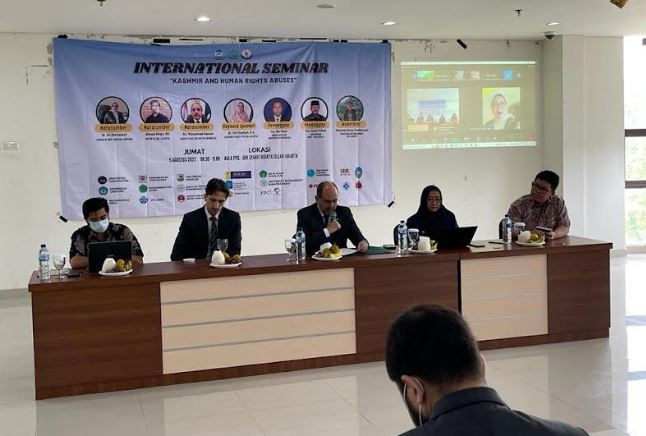 Ambassador Muhammad Hassan, in his remarks, briefed the participants about the situation in Indian Illegally Occupied Jammu and Kashmir (IIOJK) in the wake of 5 August 2019 and highlighted how the demographic structure and social fabric of Kashmir were under attack through various new legislations in IIOJK which would create demographic apartheid in IIOJK.

He mentioned that the Kashmiris were being subjected to every inhumane treatmentand worst atrocities by Indian security forces who were committing blatanthuman rights violations, making IIOJK ‘a living hell’. While mentioning Pakistan’s unflinching diplomatic support to the Kashmir cause, he called on the international community to play its due role inthe resolution of the Kashmir issue through the implementation of relevant UN resolutions.

Other speakers also highlighted the human rights violations in IIOJK,especially deprivation of the rights of women and children,India’s disregard forinternational law and UN resolutions, and the role of the UN and international community in resolving the Kashmiri issue.

They called on the international community, especially the members of the OIC to take notice of the Indian brutalities in Jammu and Kashmir, and take effective measures to end them. With regard to the final solution to the issue, the speakers stressed on the United Nations to play a more effective role and force the concerned parties to come to a negotiated solution. The speakers opined that being the largest Muslim country, India could play a role in resolving this issue. Some speakers were also of the view that to resolve this long-awaited complex issue, the global powers should exert their influence.

In the question-answer session, the participants actively participated and asked many probing questions regarding the issue. Ambassador Muhammad Hassan gave them satisfactory answers.