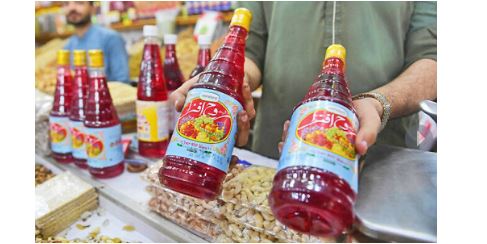 The Delhi High Court has “permanently restrained” retailers on Amazon.in from selling Pakistan-made Rooh Afza on the e-commerce website following a trademark claim made by the famous sherbet’s Indian manufacturer, local media has reported.

In its petition, the foundation informed the high court that it owned the right to the “Hamdard” and “Rooh Afza” trademarks and had noticed last year that some sellers on Amazon had listed “Rooh Afza” products, according to a report in The Indian Express.

It then approached Amazon after which some of the listings were removed, the report stated, noting however that the Hamdard National Foundation recently found that some retailers were selling Rooh Afza bottles manufactured in Pakistan.

The Pakistan-manufactured bottles did not comply with the requirements of the Legal Metrology Act and the Food Safety and Standards Act, which governs such products in India, the petitioner contended, according to a report by NDTV.

“The mark ‘Rooh Afza’ has been used by the plaintiffs for a range of products including non-alcoholic sherbets and beverages, for which plaintiff No.2 [Hamdard Laboratories (Waqf)] has obtained the assignment on Aug 11, 1975 from plaintiff No.1. The mark Rooh Afza is registered in India and one of the registrations of the plaintiffs dates back to Aug 3, 1942,” The Indian Express quoted the high court as observing.

It further observed that the listings of the Pakistan-made Rooh Afza bottles on Amazon led to Hamdard Laboratories India’s website, which could confuse consumers.

The Delhi High Court also ordered Amazon to take down any other listings that infringed on Hamdard National Foundation’s trademark in accordance with the Information Technology (Intermediary Guidelines and Digital Media Ethics Code) Rules, 2021.

After Partition, one of his sons stayed in Delhi while the other moved to Pakistan.

They set up factories in both the countries — as well as one in East Pakistan, which became Bangladesh in 1971 — under two firms.

Hamid Ahmed, the great-grandson of the founder, who runs the Indian business, told earlier this year that the recipe had not changed in the last 115 years.