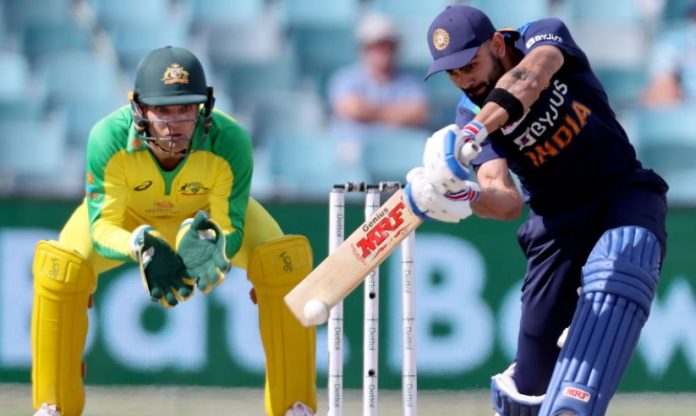 Australia fast bowler Josh Hazlewood took the key wicket of Virat Kohli for 63 not long after the India captain became the fastest player to score 12,000 runs in one-day internationals as the visitors scored 302-5 on Wednesday in the last of three ODI matches.

Kohli became the fastest player to score the 12,000 ODI career runs when he tapped Abbott to mid-off and took a quick single. Kohli achieved the feat in his 242nd innings, 59 innings quicker than Sachin Tendulkar.

The now-retired Tendulkar has the highest number of ODI runs with 18,426.

Kohli posted his 60th ODI century before feathering a catch to Australian wicketkeeper Alex Carey, a decision that went to the TV umpire after it was given not out on the field.

India, which lost the first two matches at the Sydney Cricket Ground, won the toss and elected to bat at Manuka Oval and hoped for a change in momentum. The visitors made up for a slow start with an unbeaten 150-run partnership between Hardik Pandya (92) and Ravindra Jadeja (66), a record for India for the sixth-wicket against Australia. The pair added 110 runs in the last 10 overs.

India lost both openers in the first 16 overs. Shikar Dhawan played a loose shot off Sean Abbott to Ashton Agar in the covers for 16, and Shubman Gill was trapped lbw for 33 trying to sweep Agar.

Pandya anchored the latter half of the innings, scoring 92 from 76 balls, while Jadeja’s 66 came from 50 balls and contained five boundaries and three sixes.

Australia won the first ODI by 66 runs and the second by 51 to clinch the series. Australia batted first in both wins and teams batting first have won the last seven games at Manuka Oval.

Cameron Green made his ODI debut for Australia as a replacement for injured opener David Warner. The latter had sustained a groin strain while fielding in Sunday’s series-deciding ODI win at the SCG.

After scores of 69 and 83 in the first two ODIs, Warner is hoping to recover in time for the test series, which starts Dec. 17 in Adelaide.

Green conceded 27 runs from his first four overs in ODI cricket. Agar returned the best figures for Australia with 2-44 from 10 overs, avoiding the India’s run-scoring onslaught in the dying overs.