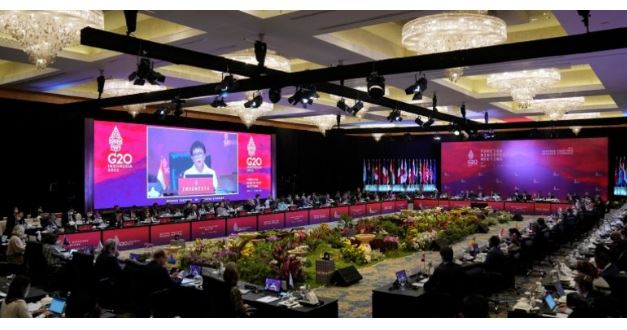 Indonesian Foreign Minister Retno Marsudi called for an end to conflict and for a solution to a looming global food crisis to be found as Russia‘s invasion of Ukraine cast a shadow over a G20 foreign ministerial meeting in Bali.

The presence of Russian Foreign Minister Sergei Lavrov on the resort island prompted top Western diplomats to boycott a dinner hosted by Marsudi on Thursday night.

In a speech opening the meeting, Marsudi warned that an increasingly polarized world had made it harder for countries to sit down together at the same table.

“The current global situation makes people lose faith in multilateralism and its capacity to respond effectively to global challenges,” she said.

“Multilateralism is not perfect. But can we imagine if we have to live without multilateralism? I am sure the situation will be even worse. Unilateralism will become the norm, the mighty will take all,” she said.

U.S. Secretary of State Antony Blinken and China‘s Foreign Minister Wang Yi are among those attending the meeting, which marks the first time senior Russian and Western diplomats have met since the Russian invasion of Ukraine began in February.

Indonesian President Joko Widodo has attempted to mediate between Russia and Ukraine, visiting both countries last week on a self-styled peace mission.

Widodo warned last month that a global food crisis caused by the Russian invasion of Ukraine could send people in developing nations into “the abyss of extreme poverty and hunger.”